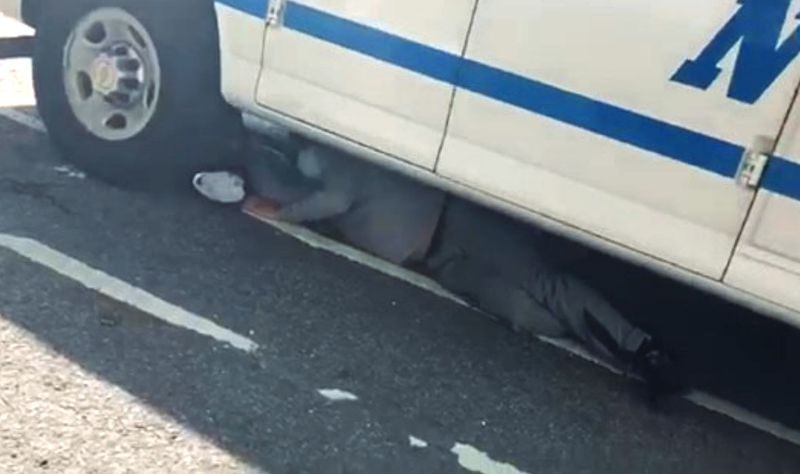 The NYPD used a paid informant at a Brooklyn protest in July to perform days of surveillance on an anti-cop demonstrator, eventually arresting the man for attempting to cut the brakes on a cop car, federal prosecutors said Wednesday.

Jeremy Trapp, 24, who the NYPD arrested July 19 in the case and was released without bail on state charges, was attending a protest outside Brooklyn Criminal Court on July 13 when he met the NYPD confidential source. He told the source that he believed the police are racist, that he wanted to harm officers and that he had previously set fire to an NYPD car, according to the feds.

They met up the night of July 15 and the confidential source recorded portions of the conversation.

“Trapp told the CS that he wanted to ‘burn the [Verrazzano-Narrows] bridge down’ so that ‘white supremacists’ could not use it to get to Brooklyn from Staten Island,” an FBI agent wrote in the criminal complaint against Trapp.

They took photos of the bridge as reconnaissance, federal prosecutors said.

Prosecutors claim that Trapp told the confidential source that burning cop cars was not enough and that they should burn down NYPD stationhouses instead.

Two days later, the source and Trapp again met up, planning to find unattended NYPD cars to cut the brake lines, the feds said. The NYPD set up a surveillance team to follow the duo.

Trapp attempted to cut the brakes on an NYPD car in Sunset Park, while the source acted as a lookout, according to the complaint. The source and surveilling NYPD officers took video of Trapp under the NYPD car.

The duo then drove around Brooklyn, stopped at the Occupy City Hall protest and then returned to Brooklyn, where cops arrested Trapp.

Trapp actually partially severed the “wheel speed sensor” of the cop car, which could “adversely impact a driver’s ability to stop and maintain control of the NYPD Van in an emergency,” according to an NYPD mechanic. The wheel speed sensor resembles the brake line.

Trapp is charged in Brooklyn Federal Court with tampering with the NYPD vehicle. He faces up to 20 years in prison on the charge.

The confidential source is a registered informant paid by the NYPD.

“The information provided by the CS has proven reliable in the past and has been corroborated by independent investigative techniques,” the feds wrote in the complaint.