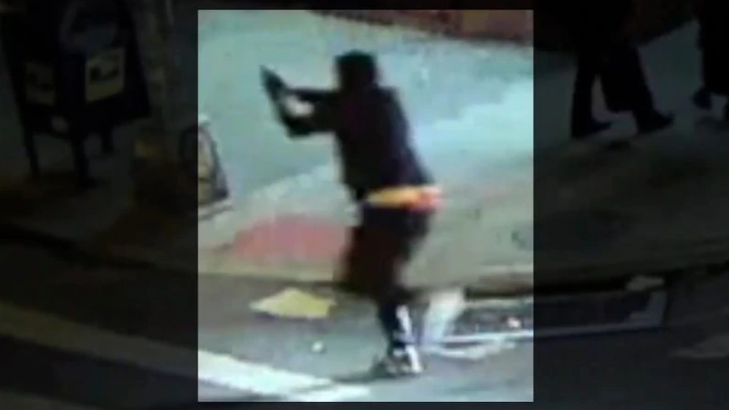 Police on Thursday released surveillance images of the gunman who sparked a wild Bronx shooting that left an 11-month-old baby wounded by a stray bullet.

The shooter, dressed in a black hoodie with a Nike logo across the front, fired two shots at a man he was chasing past the corner of E. 198th St. and Valentine Ave. in Bedford Park about 6:45 p.m. Wednesday, cops said.

Cops released surveillance video of the shooter as well as images of a grey four-door sedan they say he fled the scene in. The NYPD is asking the public’s help identifying the suspect and tracking him down.

One of the shots fired went wild, striking the baby — who turns 1 on Friday — in the left cheek. The baby was sitting in the back seat of a parked car with her 32-year-old mother.

The child’s father had run into a corner deli to buy groceries, police said.

Medics rushed the child to St. Barnabas Hospital before transferring the tot to New York-Presbyterian Hospital Weill Cornell, where she was in critical but stable condition Thursday.

“This is completely unacceptable in our city,” NYPD Deputy Chief Timothy McCormack, the commanding officer of Detective Borough Bronx said during a Wednesday night press conference. “[The baby’s] birthday is going to be in a few days. … This is unacceptable and it needs to stop.”

“We have to be honest about what’s happening in the Bronx,” Mayor Adams said during the presser. “This is not the city our children should grow up in.”

Anyone with information regarding his whereabouts is urged to call NYPD Crime Stoppers at (800) 577-TIPS. All calls will be kept confidential.