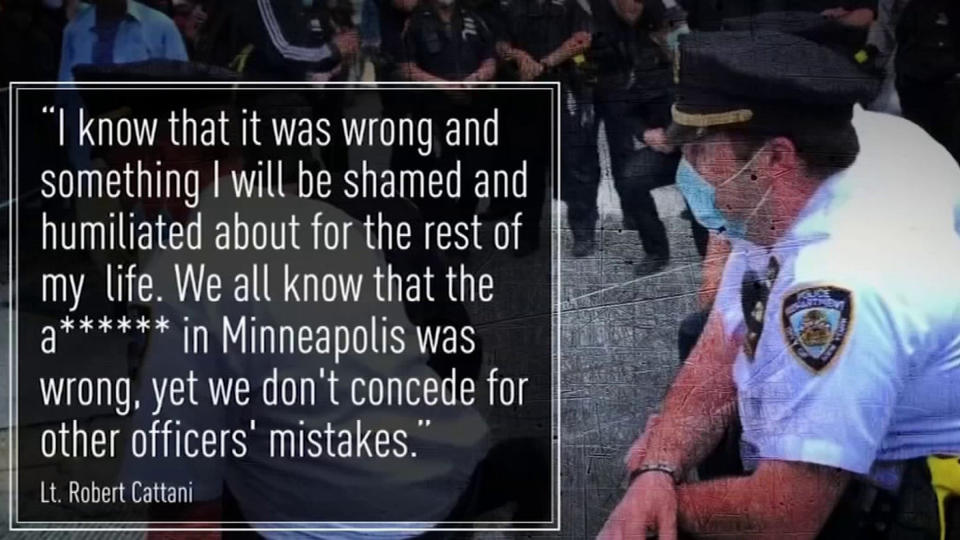 An NYPD lieutenant who joined protesters in taking a knee as they took to the streets to demand an end to police brutality following the death of George Floyd now says he regrets the symbolic gesture.

In an email obtained by NBC New York, Lt. Robert Cattani of the Midtown South Precinct on June 3 apologized to his colleagues, saying he had trouble sleeping since he “made a horrible decision to give into a crowd of protesters demands and kneeled alongside several other officers.”

For two straight weeks, thousands of New Yorkers have marched in honor of Floyd, a Black man who was killed after a police officer in Minneapolis kneeled on his neck for nearly nine minutes. Protesters across the city, and across the world, kneeled and raised their fists to advocate for racial justice in the days following the initial lack of charges against officer Derek Chauvin and other cops who were there.

Even NYPD Chief of Department Terrance Monahan joined protesters in taking a knee. Although most people in the crowds cheer when cops joined them in solidarity, some have criticized the action as a publicity stunt because they’d rather see changes in policy.

In the email to his coworkers, Cattani said the action “goes against every principle and value that I stand for.” The Post first reported on the email.

“I know that it was wrong and something I will be shamed and humiliated about for the rest of my life. We all know that the a–hole in Minneapolis was wrong, yet we don’t concede for other officers’ mistakes. I do not place blame on anyone other than myself for not standing my ground,” he continued.

Cattani didn’t address why he thinks his action on May 31 at Foley Square was wrong, but he wrote that he even considered leaving the department over it.

While the protests have been largely peaceful, especially during daytime when Cattani was seen kneeling, the lieutenant said that he didn’t know how protesters would have reacted if he and the other officers didn’t appease their call to take a knee.

“I did not consider the consequence or facts of what I was doing,” Cattani wrote. It is unclear what consequence he faced for kneeling.

“I spent the first part of my career thriving to build a reputation of a good cop,” he continued. “I threw that all in the garbage on Sunday.”

Mayor Bill de Blasio said Friday he did not know the lieutenant, but appreciated his condemnation of the killing of George Floyd.

“I think every police officer in America needs to condemn the murder of Floyd because it violates the oath they take,” de Blasio said.

The lieutenant’s note comes on the heels of several police reform bills being passed by New York state lawmakers, including one that makes police officers’ disciplinary records public.

Speaking directly to officers on Thursday, NYPD Commissioner Dermot Shea said officers need to listen to the public sentiment and why they are protesting.

“I’ve heard police officials this week talking about how could people feel this way. The quicker we realize that, the quicker we get to a solution,” Shea said.