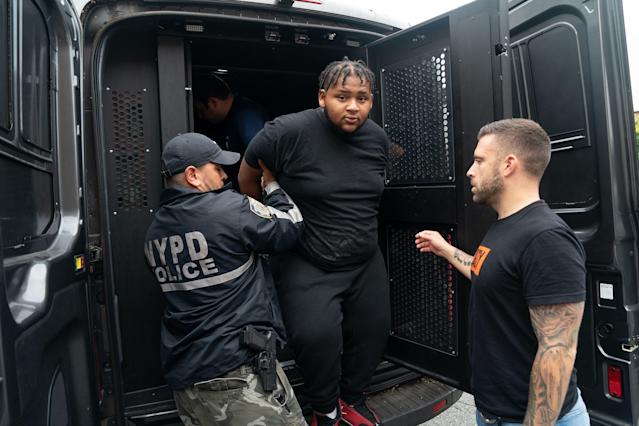 Five members of a trigger-happy East Harlem gang that changed its name — but not its thirst for violence and vengeance — were busted Wednesday in an investigation of 21 shootings that wounded four innocent bystanders, authorities said.

The bust included four members of the Chico gang named in two indictments released later in the day in Manhattan Supreme Court. A fifth Chico was arrested on separate charges.

Jasier “Neeko” Mitchell, 20, and his brother Jamique Mitchell, 19, were arrested in their apartment on Paladino Ave. in the Wagner Houses project early Wednesday after police showed up with a warrant and their father opened the door.

Inside the apartment, police seized a handgun — one of 17 they’ve confiscated in their probe of the Chico gang. Cops also seized a 30-round ammo magazine, marijuana and the drug K2.

Jasier Mitchell is among 13 suspects named in a pair of Manhattan Supreme Court indictments aimed at taking down the Chico gang, said officials. His brother Jamique was arrested on separate charges.

Three other suspects were arrested in relation to the indictment Wednesday included Melvin “Bam” Mitchell, 20, Dakotah “Kotah” Campbell, 19, and a girl, 16, accused of shooting someone in the leg.

“I’m innocent,” Melvin Mitchell said as police led him into a precinct for processing.

Nine other suspects have been arrested in relation to the indictment and were in custody before Wednesday.

The Manhattan Supreme Court indictment connects the 13 suspects to 21 shootings and 12 shooting victims. Among the four people hit by stray bullets in the shootings was a 12-year-old boy shot in the leg in December 2018, said Manhattan DA Cy Vance Jr.

During the probe, investigators uncovered 14 semiautomatic pistols and three revolvers, at least five of which the suspects originally bought in Maine, said a statement from Vance’s office. The indictment covers crimes between November 2018 and July 2021.

The Chico gang is based at the Wagner Houses, a New York City Housing Authority development just south of the E. 125th St. entrance to the Triborough Bridge.

The Chicos were the target of a 2019 takedown in which 12 suspects were linked to 17 shootings as the gang sought revenge for the 2016 murder of 16-year-old Juwan “Chico” Tavarez at the Jefferson Houses, also in East Harlem.

Tavarez’s death led the gang to rename itself “The Chicos,” said police. Previously, the gang was known as 20-Enty and before that, as Flo Boys.

With Tavarez’s death still unsolved, his surviving fellow gang members continued a campaign of violence against their rivals — most notably against their chief nemeses at the Jefferson Houses, which stretch between First and Third Aves. just below E. 115th St.

That rival gang is known as the Jeff Mob and as ABM, short for “All About Money,” said police.

Detectives believe a Jeff Mob member killed Tavarez, who was shot at Third Ave. near E. 115th St. on Good Friday in 2016 and died two days later, on Easter.

“They’ve been beefing before the murder,” a police source said of the two gangs. “He gets murdered and that was the boiling point. It’s just nonstop. They wouldn’t let up.

“It’s a small amount of people doing the crime and violence out there.”