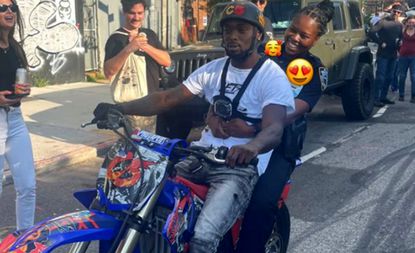 A uniformed NYPD cop caught on camera riding on the back of a dirt bike at a Brooklyn block party has been suspended without pay, police said Monday.

The cop, identified as Donna Scott, was on duty when she rode on the bike during a party on Banker St. in Greenpoint. A video clip shows the bike operator popping a wheelie with Scott smiling on back.

Scott, who joined the NYPD in April 2019, was assigned to the 83rd Precinct in Brooklyn earlier this month.

Her ride came during a citywide crackdown on illegal dirt bikes and ATVs after complaints of loud revving, reckless riders and crashes. In May, NYPD Chief of Department Rodney Harrison offered up to $100 to any New Yorker who tips off police to or turns in an illegal motorbike.

The Instagram user who initially posted the picture of Scott defended the officer in a post Sunday, describing the party as a “legal event.”

“Usually cops and bikers don’t mix, but she actually took the time to get to know us and get a better understanding of the culture. The smile on her face says it all,” the Instagram post reads.

“This was a huge first step to bridging the gap between us. To the officer who took her time out to understand, thank you on behalf of the entire bike life community.”