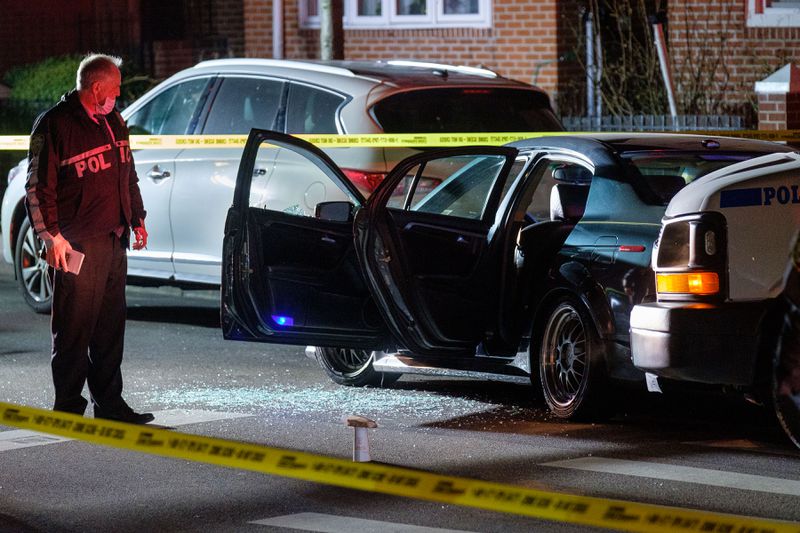 A car thief slammed his stolen vehicle into a police van in Queens, drawing gunfire from cops that wounded the crook’s accomplice, police said Monday.

When officers arrived a man told them he had momentarily left his keys inside his car and that two crooks hopped in and drove off.

But by tracking the victim’s cellphone, which he had left in the sedan, police were able to track the vehicle to a spot almost a mile away, on 97th Ave. near Allendale St. in Jamaica.

“As the officers exited the marked police vehicles the suspects accelerated in reverse at a high rate of speed into a marked police van,” NYPD Chief of Patrol Juanita Holmes said. “One officer discharged his firearm and struck the 28-year-old male in the chest.”

A woman who had stepped outside to throw out the garbage disputed the police account, saying the shot was fired, maybe inadvertently, while the car was stopped, with the suspects outside the car.

“They shot the guy for no reason,” said the woman, who would not identify herself. “He was at a complete stop. Like there was no reason for him to shoot him. He didn’t have any weapon. He didn’t run at the cops.”

It was not clear how many cops were in the van when it was struck. Two cops were taken to Long Island Jewish Medical Center to be evaulated.

The wounded suspect in the stolen car was taken to Jamaica Hospital in stable condition.

Charges were pending against him and his alleged accomplice, the 21-year-old man driving the stolen car, who was busted moments after the crash.

“Are you ok?” the witness heard the driver saying before yelling at police, “You shot my mans!”

The NYPD patrol guide says police should not fire at a moving vehicle unless something other than the vehicle is being used as deadly physical force. In practice, however, police have cited extenuating circumstances in confrontations where it was believed that officers had no choice but to fire.

The Sunday night shooting happened a half-mile from where Sean Bell was shot dead by police after he was accused of speeding off, striking an NYPD detective’s leg, then crashing into a police van.

Bell, who was killed in a hail of 50 police bullets after leaving a Jamaica strip club hours before his wedding, was in a car with two friends, one of whom police thought was armed. No gun was ever found. The cops criminally charged in the case were acquitted, though the detective who fired first was later fired, with three colleagues forced to resign.

Sunday’s shooting was the fifth involving NYPD cops this year, with one suspect killed and three others wounded.

On Jan. 6 in Brownsville, a car thief was shot in the leg when he tried to drive a stolen van into officers, police said.