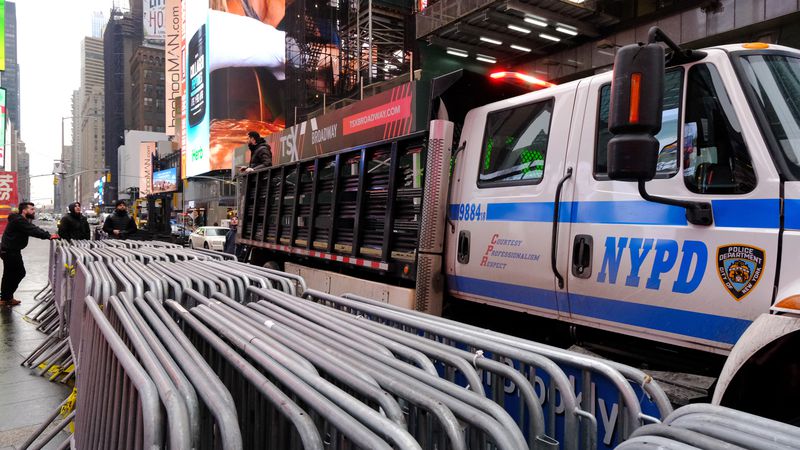 It’s fitting that the year from hell should end without a celebration.

The coronavirus pandemic — in its final, cruel act of 2020 — has grounded public New Year’s Eve bashes around the globe, including the iconic ball drop at Times Square which will be closed to revelers this year.

The crystal orb that normally draws millions of visitors will still make its famous descent down the flagpole — but don’t bother trying to sneak a peek in person, says the NYPD.

“Next year we will all gather and fill Times Square,” Chief of Department Terence Monahan said in a press conference police headquarters Wednesday. “This year don’t even attempt to come and watch it.”

Anyone seen gathering near Times Square “will be told to move along,” Monahan warned.

“We’re not going to have you stand on street corner and stare up,” he said. “Don’t come to the area and think you be able watch it. Don’t come.”

“It’s almost like a ‘Seinfeld’ episode,” Police Commissioner Dermot Shea added. “This is a ball drop about nothing, where you can’t see, so you may as well stay home.”

First responders and essential workers will be allowed to watch the ball drop from a private spot in the Times Square area.

Everyone else will be able to watch it remotely on TV or via livestream at TimesSquareNYC.org beginning at 6 p.m.

The night’s performances — including disco diva Gloria Gaynor’s singing of the apt-for-2020 anthem “I Will Survive” — will be aimed at TV audiences.

Cops will be still be protecting Times Square because of its “iconic status” but the number of officers will be reduced by 80%, police said.

The officers will be sent across the city “where they will be needed,” Monahan said.

“Coming to Times Square is a family tradition for some and a bucket list for others, but this year is different,” NYPD Chief of Patrol Juanita Holmes said. “We can’t emphasize enough everyone should stay home.”

The shutdown dampened Cesar Soltero’s spirits as he took photos at Times Square this week. The 36-year-old engineer from Orlando, Fla. skipped his usual holiday trip to see family in Mexico so he could be at the Crossroads of the World on New Year’s.

“I’m going to celebrate that I’m alive, but I’m not precisely too happy for this year,” Soltero said.

New Year’s Eve will look vastly differently in cities around the world, after a year where COVID killed an estimated 1.8 million people, including more than 350,000 in the United States.

Germany has banned the sale of fireworks, which residents usually set off in the streets, and a pyrotechnics show scheduled for Berlin’s Brandenburg Gate has been canceled.

From the Las Vegas Strip to the Arc de Triomphe in Paris, fireworks displays are being snuffed out.

There will be no pyrotechnics over the River Thames in locked-down London, where New Year’s Eve also marks Britain’s final economic split from the European Union.

But Big Ben, which has been largely silent since 2017 while its clock tower was being restored, will sound 12 bongs at midnight.

Fireworks will go on in Rome, but concerts in public plazas have been scrapped in favor of live-streamed performances and art installations.

Pope Francis will skip his typical Dec. 31 visit to the Vatican’s life-sized Nativity scene in St. Peter’s Square, and instead will deliver his New Year’s Day blessing indoors to prevent crowds from gathering.

The Christmas Day bombing in the downtown tourist district of Nashville, Tenn. prompted the city to cancel its plan to light fireworks — and blow up a 2020 sign.

“To say it would have been tone deaf would be an understatement,” said Bruce Spyridon, president of the Nashville Convention & Visitors Corp.