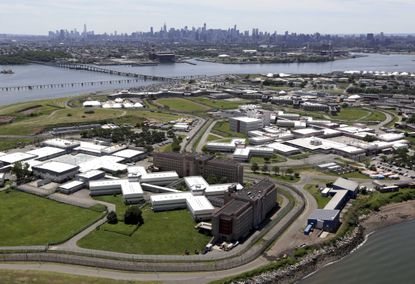 The city will pay $1.65 million to the family of a Rikers Island inmate strangled by a cellmate, the family’s lawyer told the Daily News.

Casey Holloway’s family agreed to settle their lawsuit with the city last month, more than two years after the 35-year-old inmate’s death inside a mental observation unit at the jail.

Holloway, who was in jail facing robbery charges, was attacked by Artemio Rosa, 27, while sitting on a chair inside the Anna M. Kross Center on Rikers Island on July 9, 2018.

A correction officer pulled Rosa away but Holloway, who had asthma, struggled to breathe and collapsed, Correction Department records show.

“He was not immediately taken to an infirmary and/or otherwise provided medical attention,” the lawsuit alleged. “He died later that day, due in part to a delay in proper medical treatment.”

“This should never have happened,” Holloway’s sister, Sheila, said. “Our family hopes the city fixes the way it treats and protects people at Rikers so this doesn’t happen to anyone else. We miss Casey every day.”

A Law Department spokesperson said in a statement that “settling this case was in the best interest of the parties.”

Rosa and Holloway were put in a unit that offered limited medical care or structured programs and often had too many inmates for staff to supervise properly, according to the lawsuit.

Rosa, a Trinitarios member with more than 30 arrests on his record and a history of mental illness, had already assaulted inmates and jail staff in four earlier incident, the suit says.

Holloway’s family contended Rosa should have been placed in a Program to Accelerate Clinical Effectiveness unit geared toward getting mentally ill inmates into activities to help them cope.

Rikers opened four PACE units in 2015 — far too few, the lawsuit says — and despite Mayor de Blasio’s pledge in 2016 to triple that amount, the city has dragged its heels creating more of the specialized units.

“They failed to carry through on that promise,” the Holloway family’s lawyer, Josh Kelner, said. “And that’s why Casey and Mr. Rosa were left in this woefully deficient unit.”