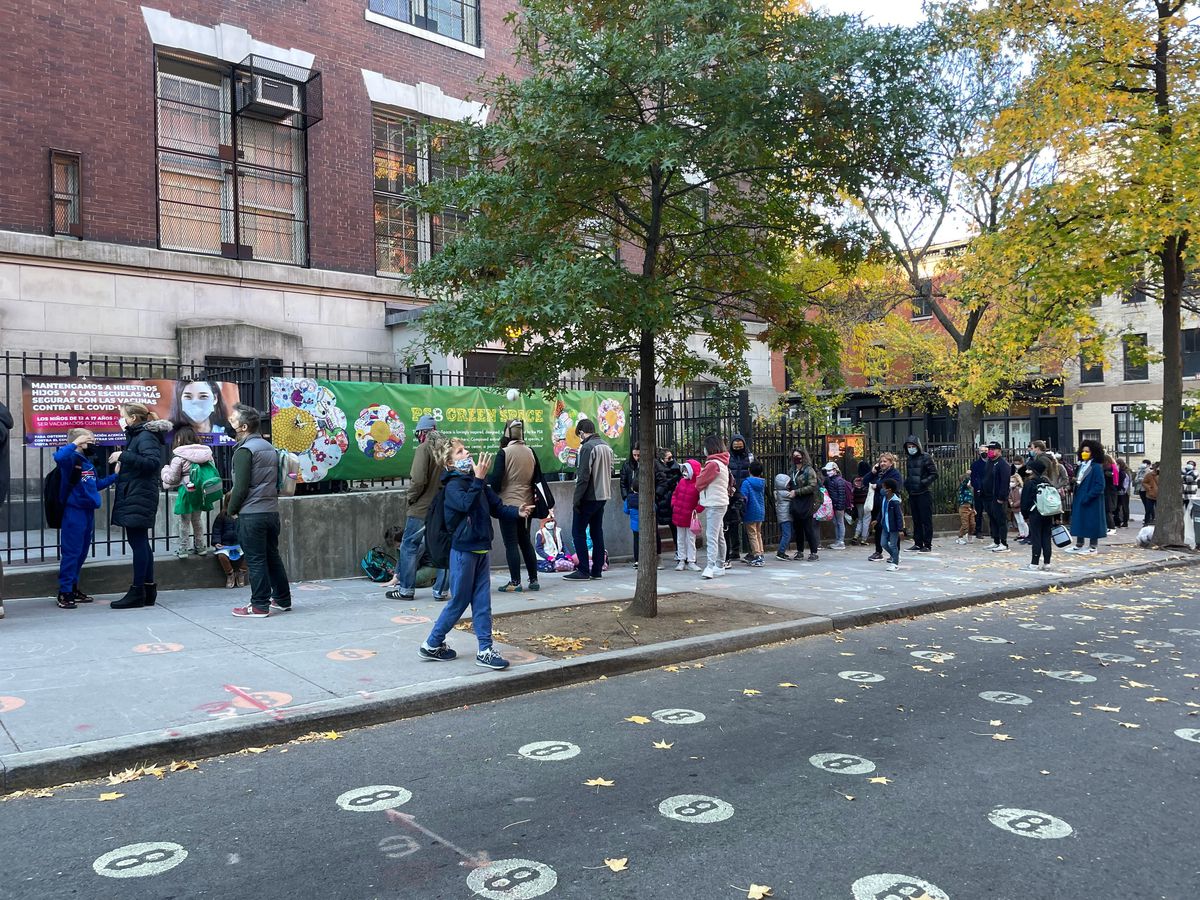 A city effort to vaccinate newly eligible kids aged 5 to 11 against the coronavirus through school-based vaccine clinics kicked off Monday morning — but ran into some early hiccups.

At some schools, anxious parents spent hours waiting outside in the hopes of securing a vaccine dose for their elementary-aged kids, only to be told the clinic didn’t have enough supply.

Parents at P.S. 8 in Brooklyn Heights began lining up at 6 am for the city-run school vaccine distribution, with the line swelling to more than 100 at its biggest, one parent said. But city workers running the clinic said they could only give out 50 shots because they needed to conserve doses for other schools they were visiting Monday and didn’t have time to re-up, according to parents at the school.

“I just don’t understand why they would have taken this approach,” said Michele Walsh, the parent of a first and fifth-grader who was turned away after waiting for more than an hour on line.

Walsh said she refrained from looking for other appointments for her kids because she was counting on getting them vaccinated at the school.

She added that P.S. 8 administrators even gave city officials a heads up in advance that there was going to be a huge demand for the shots Monday morning.

Walsh was even more frustrated that her kids had to miss the start of school while waiting outside in vain for a COVID-19 vaccine. “If they had just given us numbers and told us how many they had, the kids could’ve been in school instead of waiting outside,” she said.

A parent at P.S. 40 in Manhattan reported a similar supply problem, and said the shipment of shots still hadn’t shown up by 10:45 am — nearly four hours after the distribution was supposed to start.

Line an ave deep for kids shots…but no one here to give the shots! H and h was supposed to be here at 630 for a 7 start. Now 730 and a line 100+ deep @NYCMayor @elizashapiro @Jill_Jorgensen @reemadamin pic.twitter.com/L3l2qw1InM

Hizzoner added that the city had tried to match supply of the youth vaccines with anticipated demand.

“If we’re seeing more demand, then that’s a good thing, but we’ve got to catch up with it quickly,” de Blasio said.

He said officials would try to deliver additional doses as soon as possible to schools with supply shortages. The restocked vaccines could be available as soon as later in the day Monday or during additional distribution times later this week.

“This is just day one, and we will get the vaccine to all of the kids whose parents are supporting it,” said Mitchell Katz, the CEO of NYC Health and Hospitals.

City officials announced the school vaccine distribution last week as part of a city plan to boost inoculation numbers for young kids following the recent federal approval of the vaccine for kids ages 5 to 11. Every public school serving elementary-aged kids will get a one-day pop-up vaccine clinic over the course of this week.

Kids were required to be accompanied by an adult and have written or verbal permission from a parent or guardian to get a shot.

Kids will also get a $100 prize for getting vaccinated, de Blasio said.

He announced Monday that city workers and contractors will get four hours of paid leave from work to take their kids to get vaccinated, and said officials are working on a bill that would require private employers to extend that same flexibility.

Nearly 17,000 kids ages 5 to 11 have gotten a jab since shots started flowing last Thursday, Hizzoner added. He said “if we see a lot of demand, we’re ready to add to that schedule.”