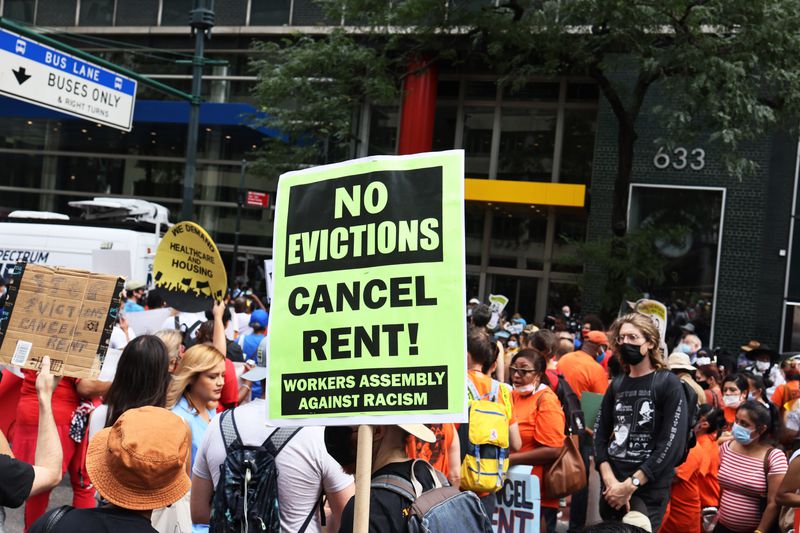 A long-dreaded wave of eviction cases has arrived as the city eases out of the pandemic — and public defender groups say they’ve run out of lawyers to represent low-income tenants.

After the state’s eviction ban ended on Jan. 15, thousands of landlords’ lawsuits flooded the dockets. More than 6,000 eviction lawsuits were filed in the city in February and 7,000 in March, according to the state Office of Court Administration. That’s in addition to more than 200,000 eviction lawsuits filed during the pandemic, most of which were on pause until the eviction moratorium was lifted.

A stunning 685,000 of renters collectively owe an estimated $3.3 billion in back rent, according to the Community Service Society of New York.

That means thousands of New Yorkers facing eviction could be left to represent themselves.

Richard Ashley, 52, said the stakes couldn’t be higher. The former EMT prevailed in a five-day trial in Queens Housing Court — that took more than four months to complete. He doubted he would have been “able to cope mentally or physically” if he’d had to represent himself in the eviction case.

“With no lawyer, I don’t understand what’s happening … I’m eternally grateful. I feel for the people who don’t have anyone to represent them,” he said.

Ashley, who has multiple sclerosis and other severe disabilities, faced eviction in September 2020 from a supportive housing development in Queens, Institute for Community Living, where he lived for more than seven years. He won the case last month — and credited his Legal Aid Society lawyer.

“I actually lived a horror story,” Ashley told reporters. “If it wasn’t for [my lawyer] and her coworkers, I don’t know what I would’ve done.”

A message left with Institute for Community Living was not returned.

On Tuesday, the Legal Aid Society and New York Legal Assistance Group said new tenants facing eviction won’t be as lucky as Ashley. The public defenders said they can’t take on a single new eviction case in Queens for all of April due to their caseloads. Housing court lawyers are juggling as many as 80 cases.

A third agency, Legal Services NYC, said it could take no more than 60 cases this month. In March, it declined more than 475 cases in the Bronx, OCA said, where eviction rates are higher than anywhere in the state. Judges sent those cases into settlement negotiations.

Richard’s lawyer Julia McNally said she and a team of lawyers needed months to prepare for Ashley’s complex case.

“I think that without an attorney, there’s an overwhelming likelihood that he would have just agreed to move,” the lawyer said, adding that Ashley likely would have wound up living in the shelter system.

McNally, who teaches law at NYU, said housing legislation has become so complex and changes so often that she’s had to change her syllabus every semester.

“It is a very, very complicated, fast-paced area of the law, so it’s not at all conducive for pro se litigants to represent themselves. The idea seems shocking that someone in criminal court should represent themselves — we should have that same visceral reaction,” McNally said. “It could mean someone losing their home.”

Low-income tenants in New York became eligible for free legal representation by the city’s Right to Counsel bill in 2017. The legislation protected renters who earn 200% below the federal poverty line.

“It is unconscionable that OCA is forcing tenants to litigate their right to remain in their homes without an attorney to represent them.”

The rate of new eviction cases does not yet match the rate pre-pandemic. By this time in 2019, over 36,000 eviction cases had been filed in the city, according to OCA data. But Adriene Holder, the attorney in charge of Legal Aid’s civil practice, said public defenders weren’t required to represent all tenants at that time. Staff turnover, the need to train new housing lawyers and the case backlog has created a “perfect storm,” she said.

OCA, meanwhile, has rejected calls from public defenders and housing advocates to process cases at a slower pace until providers can represent all tenants fighting eviction.

Courts spokesman Lucian Chalfen framed the issue as a staffing problem for legal providers — not the state court system’s problem.

“We have repeatedly maintained that the inability of Right to Counsel providers, such as LSNYC and Legal Aid, to meet their contractual obligations and to be able to manage their operations will not adversely affect the functioning of Housing Court,” said Chalfen.

Holder worried the wave of evictions could become a tsunami.

“There’s no appearance that it’s going to slow down,” she said.