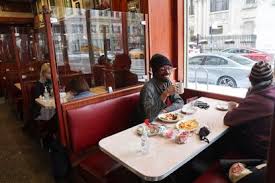 Just two weeks after eateries were allowed to welcome customers back inside, the governor said eateries can expand from the current 25% cap to better compete with surrounding areas starting on Feb. 26.

Cuomo said the change will make the limit “consistent with New Jersey,” where indoor dining capacity is already at 35%.

“What’s happening now is people in New York City, Staten Island, Manhattan, are going to New Jersey, to those restaurants, so it’s not really accomplishing a purpose,” the governor said during a press briefing in Albany.

Restaurants in Westchester and on Long Island are currently allowed to operate at 50% capacity.

City establishments were shuttered in mid-December after only being allowed to reopen indoor dining for a brief two-month period in the fall. Cuomo has previously cited the city’s density as reason to keep restaurants closed and a lower capacity limit.

However, in recent weeks the governor has loosened restrictions as the state’s post-holiday COVID surge abated, including pushing a 10 p.m. curfew back to 11 p.m. and announcing a flurry of other moves such as allowing sports venues and arenas to host fans starting next week.

The state is also opening a number of rapid testing sites across the city in an effort to boost economic activity as COVID hospitalizations statewide dropped to 6,155. The statewide positivity rate on Thursday was 3.49%.

Another 116 New Yorkers died from the virus.

While the governor noted that the Bronx continues to have the highest positivity rate in the city and said it should be a focus for testing and vaccines, only one of the 11 state-backed rapid test sites is located in the borough.