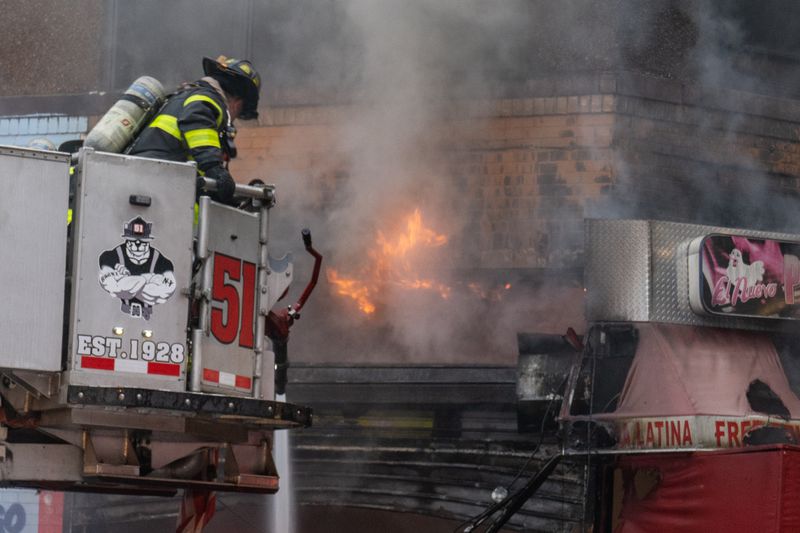 A city Emergency Medical Technician was assaulted and groped as she responded to a massive Bronx fire Thursday, officials said.

The 32-year-old EMT was standing by at the three-alarm fire on Westchester Ave. near St. Lawrence Ave. in Soundview around 7:30 a.m. when a man nearby faked a medical emergency, authorities said.

“As she approached, she was assaulted, inappropriately grabbed and held,” said EMS Chief Lillian Bonsignore. “It required the help of one of our co-workers to try to help her break out of situation.”

The man collapsed on the ground and appeared to be having a heart attack, a police source said.

When the EMT ran over to render aid, the man suddenly grabbed her and groped her chest and privates over her clothes, the source said.

Nearby cops took the man into custody, Bonsignore said. Charges were not immediately filed but the suspect is expected to be hit with felony assault and sex abuse charges, officials said.

The EMT was not seriously injured and was in the care of her family Thursday morning, Bonsignore said.

“It’s unbelievable that this despicable incident happened,” the EMS chief said. “We are here ready to assist and none of our people should have to come to work and deal with a situation like that.

“We are not going to tolerate this behavior,” added Bonsignore. “Our folks are here to save people’s lives in the most difficult situations all the time. This is not something we expect to happen again.”

Assaulting on-duty EMS personnel is a felony thanks to a state law passed in February 2016.