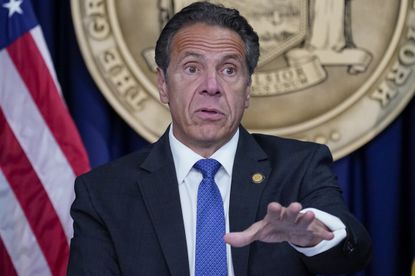 The documents, made public on Wednesday, include more than 500 pages of testimony from Cuomo and all 11 of the women who claim he harassed them.

Cuomo resigned from office in August after independent investigators working under James released a report detailing the allegations against the disgraced Democrat and determined that his behavior created a toxic work environment.

The ex-governor’s legal team has made repeated calls for the transcripts to be released in recent weeks after Cuomo was hit with a misdemeanor forcible touching charge related to allegations from a former staffer who says he groped her late last year.

Albany County District Attorney David Soares told a judge last week that there may be testimony from the staffer, Brittany Commisso, that could clear Cuomo.

Cuomo was initially scheduled to be arraigned next week. His court appearance was pushed to Jan. 7, after Soares asked for a 60-day adjournment in order to address a number of issues with the case, specifically noting that Albany County Sheriff Craig Apple “unilaterally and inexplicably” filed the complaint without giving the district attorney’s investigators a heads up.

Links to all released transcripts and exhibits: