New York placing moratorium on most evictions amid COVID, strengthening protections for homeowners 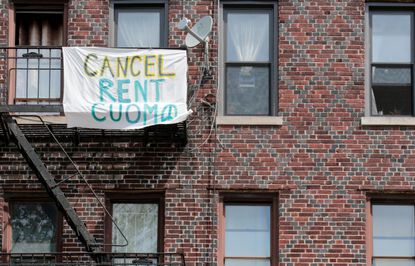 State lawmakers approved a robust ban on evictions and other protections Monday in an effort to assist renters and homeowners facing financial hardship due to the COVID crisis.

Democrats in the Senate and Assembly passed the sweeping legislative package, placing a moratorium on evictions until May, during a rare end-of-the-year session that came days before a less-stringent federal measure is set to expire.

“There has not been nearly enough done to prevent a full-blown housing crisis from erupting as a result of the COVID-19 pandemic,” Sen. Michael Gianaris (D-Queens) said in a statement. “This moratorium is a good step to ensure New Yorkers don’t get thrown out of their homes at a time when we’re asking people to stay in their homes.

“We must do even more to provide real relief in the months ahead,” he added.

The bill puts a temporary stop on evictions and foreclosures for any New Yorker who can attest that financial hardship due to the pandemic has prevented them from paying their rent or mortgage.

The new protections allow tenants to submit so-called “hardship declaration” forms that will prevent evictions until May 1. Pending proceedings will be paused for 60 days, giving renters already facing eviction a chance to fill out a form and submit it to court.

Along with banning evictions, the bill similarly bars foreclosures and tax lien sales for property owners, including for smaller residential landlords renting out 10 or fewer units, facing financial troubles.

The legislation also includes measures protecting property owners from credit discrimination if they miss mortgage payments and automatically renews some homeowner benefits for seniors and the disabled.

Tenant advocates celebrated the victory and breathed a sigh of relief after months of calling for a blanket ban on evictions.

But, they said, there is more work to do in order to keep thousands of struggling New Yorkers from becoming homeless in the months ahead.

“Passage of this eviction bill is just one component of the broader housing and rent relief package that the state legislature must enact in early 2021,” said Cea Weaver, the coordinator of Housing Justice for All. “Our legislative leaders must address the looming rent debt crisis, as many unemployed tenants owe thousands in back rent and have no way to pay it.”

Weaver and others are calling for the cancellation of accrued rent debt, the creation of a hardship fund for struggling small landlords and raising taxes on the wealthy.

Republicans in both chambers railed against the measure, echoing landlord groups in arguing that it was too expansive and could be easily abused by scofflaws.

“This legislation simply halts all housing court proceedings without consideration of income level, allowing some of New York’s wealthiest residents to escape their financial obligations by checking off a box,” Senate Minority Leader Robert Ortt (R-Lockport) said in a statement. “Meanwhile, costs on small business owners will continue to pile up, with no relief in sight.”

The bill states that the hardship declarations are signed under penalty of perjury.

Sponsor Brian Kavanagh (D-Manhattan), among a limited number of mask-clad lawmakers in the Senate chamber, defended the measure during a lengthy debate.

“Our goal here is to create a system where people have to attest under penalty of law that they have experienced a hardship and that that hardship is causing them to be unable to meet their rental obligations, and in that situation we want to protect them from eviction as an emergency public health measure,” he said from the floor.

Gov. Cuomo, who separately extended an executive order that stopped short of fully ceasing eviction proceedings, said he supports the new measure and will sign it into law.

“We want to make sure that homeowners are protected, that it doesn’t affect their credit rating, there’s no mortgage foreclosure,” Cuomo said during a briefing earlier in the day. “We want to get to May 1 and we’ll see what happens by May, but we want to protect tenants.

As lawmakers debated the bill in the Assembly, most beamed in via video. Speaker Carl Heastie (D-Bronx) tweeted that the legislation is just “one step” and expressed optimism that more aid will come from Washington next year.

“We will continue to work with our congressional delegation and the incoming Biden Administration to ease the burden on tenants and small mom and pop landlords who rent apartments to pay bills and put food on their tables,” he wrote.