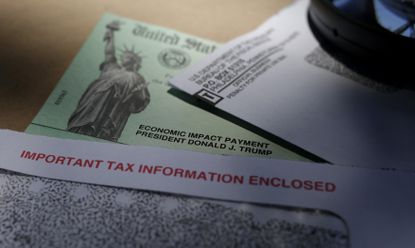 The House voted Monday to issue $2,000 coronavirus stimulus checks to most American taxpayers, turning up the heat on Senate Republicans who are unlikely to follow suit despite President Trump’s support for the sizable direct payments.

In a rare holiday House session, 231 Democrats joined 44 of their Republican colleagues in passing a measure that proposes to tweak the nearly $1 trillion stimulus package signed into law by Trump on Sunday so that its $600 stimulus checks are bumped up to $2,000.

Two Democrats, two independents and 130 Republicans voted against the measure.

The bill now heads to the Senate, where it’s unclear if Republicans led by Kentucky Sen. Mitch McConnell will even consider it for a vote, with plenty of conservatives claiming the beefed-up checks are too costly.

But an unusual political dynamic on the thorny issue could mean Republican senators feel compelled to break with their ideological beliefs in order to stay in Trump’s good graces.

The outgoing president threatened last week to veto the $908 billion economic rescue package because he said he suddenly wanted it to include $2,000 checks — even though his chief stimulus negotiator, Treasury Secretary Steven Mnuchin, and GOP leaders had maintained for months that such large payments were non-starters.

Nonetheless, after holding up the sorely-needed relief for nearly a week, Trump caved Sunday night and signed the package anyway despite a lack of $2,000 checks.

Sensing political benefit in the GOP infighting, House Speaker Nancy Pelosi (D-Calif.) went ahead with Monday’s vote to force Republicans into the uncomfortable position of voting against a proposal endorsed by Trump.

“The House and the President are in agreement: we must deliver $2,000 checks to American families struggling this Holiday Season,” Pelosi tweeted after the vote. “It’s time for the Senate to do the same.“

Senate Majority Leader Mitch McConnell (R-Ky.), whose consent is ultimately mandatory for the stimulus check supplement to get to Trump’s desk, did not immediately react to the House move.

With Trump’s signature already dried on the $908 billion stimulus legislation, the push for $2,000 checks is becoming a race against the clock.

The Treasury Department says it will start issuing the $600 stimulus checks bankrolled by the bill as early as next week.

If checks in that amount get out the door, Congress will likely face a difficult time enacting the $2,000 proposal. The other provisions of the stimulus package — like the $300-per-week federal unemployment aid bonus — are already locked in.

U.S. taxpayers earning less than $75,000 per year will get stimulus checks, and, contrary to the $1,200 direct payments issued in the spring, Americans with undocumented family members are eligible this time around.

Rep. Tom Souzzi (D-N.Y.), who represents parts of Long Island and is a major proponent of four-figure checks, said he believes there’s only one man in Washington standing in the way of increasing the payments from $600 to $2,000.

“If we can only get Mitch McConnell to finally show some empathy,” Suozzi said.

While the House threw Trump a bone on the stimulus issue, it also overwhelmingly passed a resolution during Monday’s session to override his controversial veto of this year’s $741 billion defense spending bill.

The resolution — passed with support from 87 Republicans and 322 Democrats — now heads to the Senate, where McConnell has suggested it will also get approved.

If successful, it would mark the first congressional veto override of Trump’s presidency.

Trump vetoed the massive Pentagon bill because he wanted it to include a largely unrelated provision to repeal legal protections for social media companies like Twitter and Facebook in apparent retaliation for the platforms fact-checking his false tweets about the election he lost to Joe Biden.