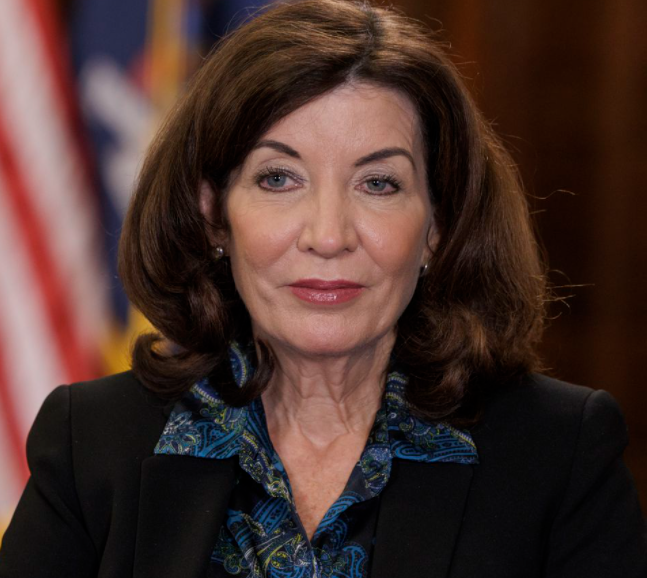 New York’s statewide mask mandate will end Thursday, two months after it was first announced, Gov. Hochul said Wednesday, but a mandate in schools is set to remain in effect until at least early March.

The governor introduced the broader mask rule on Dec. 10 to battle the brewing omicron storm that hammered New York this winter, and it faced stiff opposition upstate, where some conservative counties refused to enforce it. Hochul still twice extended the mandate, which has applied to businesses that do not have vaccination requirements.

As she announced the measure’s expiration, Hochul expressed confidence that enacting the mandate was the right move, but said New York is now in a “very good place.” Three states in the nation now have lower case rates than New York, the governor said.

“It is indeed a beautiful day here in New York,” Hochul declared at a news conference in sunny Manhattan, where the temperature climbed above 40 degrees as the statewide COVID test positivity rate dipped under 3.7%.

“This is what we’ve been waiting for,” Hochul said. “Tremendous progress after two long years.”

Still, she emphasized the state is “not done” fighting the virus, and reserved the right to extend the school rule. In addition to classrooms, masks will continue to be required in other congregate, high-risk settings, according to the governor’s office.

About 85% of adults in the state have been fully vaccinated, according to government data. But barely 30% of New Yorkers ages 5 to 11 are fully inoculated, according to the data, and pediatric COVID hospitalizations surged during the omicron wave.

Hochul, a Democrat who has prodded parents to improve childhood vaccination rates, said her decision next month on masking in schools — a political lightning rod — would be careful and not “reactive.”

The school rule is the subject of an ongoing court battle. A Jan. 31 decision from the state Supreme Court Appellate Division, Second Judicial Department, allowed the state to continue to enforce the mandate until at least early March.

On Jan. 24, a Nassau County judge had ruled that Hochul lacked the authority to implement the business and school mandates without legislative approval, but a state appeals court judge granted a stay the next day.

Republicans have fumed at the mandates, and political pressure to scrap enforced masking has grown as the pandemic approaches its third year.

New Jersey had a slightly lower case rate than New York. But New York’s is diving, and Hochul said the trends are “very, very positive.”

Dr. Denis Nash, a professor of epidemiology at the City University of New York, said that America should eventually “move away from masks,” but that some localities within New York “may still feel the need to keep going.”

“It’s early,” Nash said. “I wish the decision was not based on an arbitrary date that was set a while back.”

But Hochul rattled off a wealth of encouraging data points in her news conference, including a statewide case rate that has fallen about 91% since Jan. 9.

“Everybody I could think of has received a phone call from me,” Hochul said.

In New York City, mandates requiring mask-wearing on the subway and proof of vaccination for many businesses will remain in place even as the state tinkers with its emergency measures.

“We are continuing to follow the science and the guidance of public health professionals to keep New Yorkers safe,” Fabien Levy, a City Hall spokesperson, said in a statement. “We encourage all New Yorkers to continue to wear high-quality masks when indoors or in crowded spaces and to get vaccinated and boosted to stop the spread.”

The week-long test positivity rate in New York City slumped to 2.6% on Wednesday, according to state figures.

Hochul, a vociferous supporter of boosters, has tended to focus on the power of shots during the omicron wave, and continued her jab push on Wednesday.

“Please get your kids vaccinated,” she said. “Let’s give them that extra suit of armor.”

But she offered a deferential message to vaccinated New Yorkers who might be wondering whether they should keep masking when they drop into a shop. She stressed personal choice, and asked New Yorkers to be respectful of people who still choose to cover up.

“People ought to just use their judgment on what they feel safe with,” Hochul said. “New Yorkers are smart. They’re very smart. They’ve been following this, they’ve been staying with us — by and large — from the very beginning.”

New Yorkers’ adherence to health guidelines, she added, helped the state manage a brutal winter — one that saw the daily case count tip above 90,000 and the daily death toll approach 200 during the darkest period of January.

“Those numbers are coming down,” Hochul said. “And it’s time to adapt.”