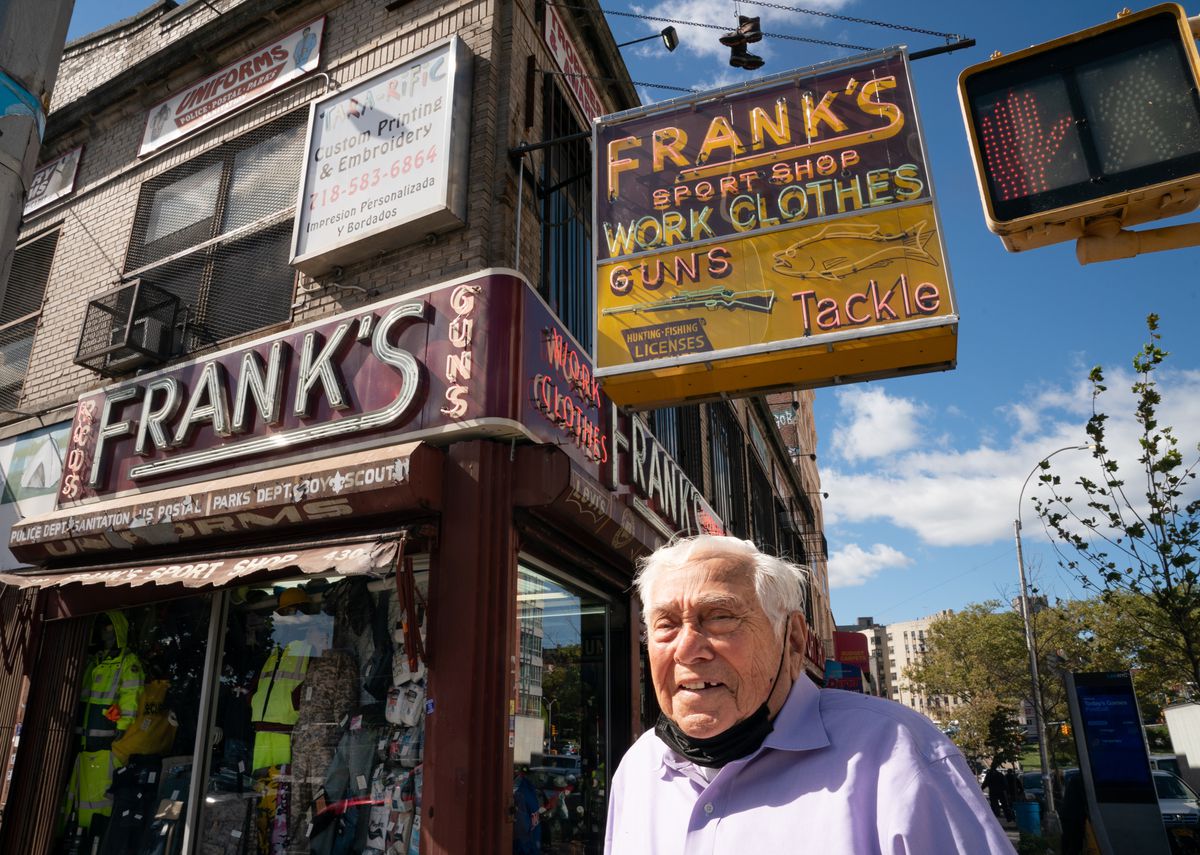 Nike just did it: The global powerhouse, with its $250 Air Jordan Retro sneakers, is kicking the venerable Frank’s Sport Shop to the Bronx curb.

The multi-billion dollar corporation sent a terse September email to the longtime East Tremont Ave. business, informing 92-year-old owner Moe Stein of its decision to exit a partnership dating back five decades. And yes, the Bronx-born Stein is taking it personally — describing the dismissal as both a slap in the face and slander of his native borough.

“This is plain chutzpah,” said Stein, sitting at his cluttered desk on a recent afternoon. “Let me tell you about Nike. We knew them when they had nothing. How do you like that? They’re putting down the Bronx. The Bronx! It’s not an elite place to them.”

The email from Nike USA declared the too-tough-to-die family business, now in its 98th year on a nondescript block two miles from Yankee Stadium, “no longer aligns with our distribution policy … This notice reflects a definitive final decision by the company.”

With those words, Frank’s will become an ex-authorized vendor of Nike goods as of Nov. 23.

The vintage store, with its weathered neon sign above the entrance, boasts a Bronx history running from the days of Yankees Hall of Famer Babe Ruth to current slugger Aaron Judge. The storied sporting goods outlet survived the Great Depression, World War II, Vietnam, Watergate, the “Bronx is burning” ’70s, borough-wide corruption in the ’80s and the current pandemic.

When Frank’s starting doing business with Nike, the store had already been open for decades and the global giant was still a small operation named Blue Ribbon Sports.

“Before they had anything, we were there,” said Stein. “If it wasn’t for guys like me, they wouldn’t be here.”

Stein knows about loyalty — he’s a neighborhood guy who never left. His store, tucked inside the nation’s poorest Congressional district, serves a mostly Black and Latino clientele. And his 20-employee workforce remained on the job and collected paychecks throughout the past seven months of the pandemic.

The white-haired Stein holds forth in a cramped space at the rear of his store, seated in a swivel chair and surrounded by a random assortment of footwear, ledgers and clothes, along with a dusty fax machine and a copier atop a file cabinet. An empty paper coffee cup sits on his desk near an ancient Rolodex.

Outside, just about every square inch of the store is jam-packed with inventory: NFL, NBA and MLB jerseys, fishing poles, rifles, shoes, sneakers, socks, baseball gloves. Gear for city sanitation and postal workers. Camping equipment. Navigating the inventory to reach Stein’s office is a winding walk through an urban corn maze.

The company, in a June 2020 fiscal year report, noted nearly 100% of its stores in greater China remained open while citing fourth-quarter revenues of $6.3 billion and 12-month revenues of $37.4 billion. Asked specifically about the Bronx operation, the global giant offered its view of the future without mentioning the past.

“Nike has a bold vision … one closely aligned with what consumers want and need,” said a spokesman. “As part of our recently announced Consumer Direct Acceleration strategy, we are doubling down on our approach with Nike Digital and our owned stores, as well as a smaller number of strategic partners who share our vision to create a consistent, connected and modern shopping experience.”

Over the years, as Nike relied on paid endorsers like Michael Jordan and Bo Jackson, Moe cultivated personal relationships. Shoppers across the years ran the gamut from Muhammad Ali and local rapper Fat Joe to Yankees stars Derek Jeter and Robinson Cano. The store was founded by Moe’s dad Frank, and he shares the business now with son Ronald, 59.

The younger Stein said Nike’s move will affect the store’s bottom line: “If you can’t get the shoe from us, you go somewhere else. And that’s where you buy a baseball glove or a jersey.”

And like his father, Ronald Stein views Nike’s decision as a betrayal.

“Be loyal to the ones you brought to the dance,” said Ronald. “The money’s not going to put us out of business. It’s just not the right way to do things.”