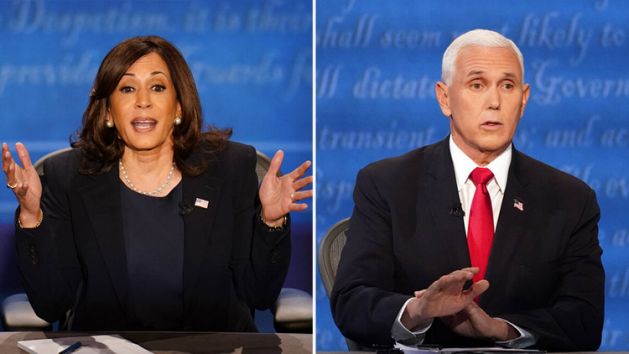 Harris without missing a beat accused the Trump administration of botching the handling of the pandemic. She charged Pence and Trump with knowing how deadly and contagious the pandemic was and said they “covered it up.”

Because of that, she said President Trump and Pence had “forfeited” their claim to another term in office.

Pence calmly struck back, defending the administration’s efforts and dropping a joke about Biden’s history of “plagiarism.”

Pence, who is in charge of the White House Coronavirus Task Force, promised the administration would have a vaccine in “unheard of time” after Harris said she wouldn’t take a vaccine Trump said was ready.

Sen. Kamala Harris on the vaccine: “If the doctors, Dr. Fauci tells us to take it, I’ll be the first in line. If Donald Trump tells me to take it, I’m not going to take it.”

Pence accused her of “undermining” people’s confidence in a vaccine and accused Harris of politicizing the virus.