More than 1,400 dolphins killed in Faroe Islands after ‘big mistake’ 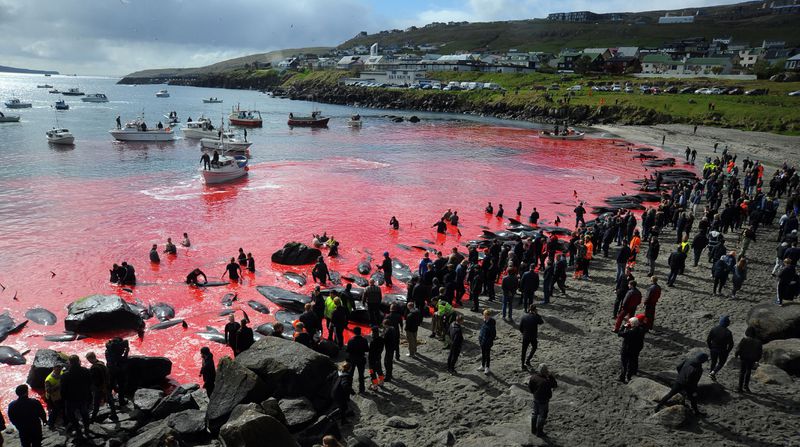 After a massive online outcry, government officials in the Faroe Islands have described the hunting and killing of a massive pod of dolphins as a “big mistake.”

On Sunday night, 1,428 dolphins were killed near the Faroe Islands, a Danish territory located between Iceland and Norway. According to conservation group Sea Shepard Global, the hunters used jet-skis and small boats to corral the dolphins in shallow water and kill them.

Officials have since said the hunters mistakenly thought the pod was much smaller but also “somebody should have known better,” Olavur Sjurdarberg, chairman of the Faroese Whalers Association, told the BBC.

On Sunday night a super-pod of 1428 Atlantic White-Sided Dolphins was driven for many hours and for around 45 km by speed boats and jet-skis into the shallow water at Skálabotnur beach in the Danish Faroe Islands, where every single one of them was killed. https://t.co/uo2fAPhCDq

Sea Shepherd and Sjurdarberg also made contradictory claims regarding whether the hunt was authorized and whether the hunters had the proper licenses. Local media reported 500 people and 5 boats registered for the hunt. Records showed it was the largest single-day dolphin hunt in the islands’ history.

While rules are strict regarding sea animal hunting on the islands, according to the government, sea animals “must be killed as quickly and efficiently as possible.”

While whaling is customary in the region — dating back several hundreds of years — and the yield of the hunt is freely distributed to the local residents, the incident has drawn both local and international outrage following Sea Sheperd’s report.

Don’t buy propaganda from Faroe Islands fisherman the barbaric slaughter of thousands of dolphins & whales has nothing to do with culture or sustainable harvesting of food. It’s just barbarism & blood lust that shames the modern world @seashepherd_uk @ChrisGPackham #FaroeIslands pic.twitter.com/I3okdUHQWj

“It’s an absolute disgrace,” animal welfare activist Dominic Dyer said. “And Denmark needs to be held for account for this… It’s disgusting. It shames the world.”