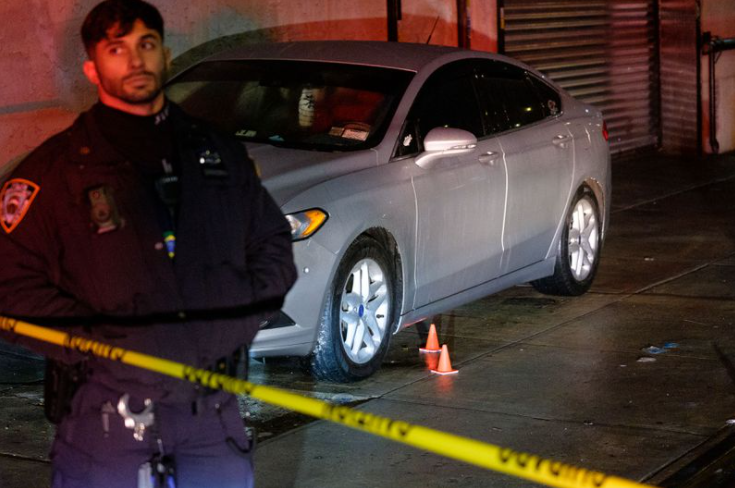 Bronx auto body shop worker Jeffrey Rivera is a witness to the growing number of people killed by strangers on New York streets — and he has the scar to prove it.

Rivera was with a friend, Gloria Ortiz, on Feb. 7 when a drive-by shooter sprayed bullets in their direction as they stood on E. 137th St. by Bruckner Blvd. in Mott Haven.

Ortiz, 39, died from a bullet that hit her head. Police said she was not the intended target.

“She was a great person, she loved everyone around her and would do anything she could for them,” said Mike Torress, a friend of hers.

Rivera, 32, lifted his shirt to display his wound to a reporter.

Of the randomness of the attack, Rivera said: “Stupidity and ignorance — you can’t control that.”

New Yorkers’ chances of getting killed by strangers grew sharply in 2021, and show no sign of abating in 2022.

Twenty-six people who didn’t know their assailants were slain in the city last year — making up 5.3% of the 488 homicides counted by police.

That was up from 2020′s grim tally of 14 stranger murders among 468 homicides. People slain by strangers made up 3% of those killed in the city that year.

The total numbers are skewed by 2017, when 42 individuals were slain by people they didn’t know. That figure was swollen by a pickup truck-driving terrorist who mowed down eight cyclists on Manhattan’s Hudson River bike path.

National data collected by the FBI shows that homicide victims are most often killed by family members and acquaintances. In 2020, people known to have been killed by strangers accounted for 10% of the 17,754 homicides reported nationwide.

The data does not include many cases in which authorities have no information about homicide suspects. That included more 52.6% of all homicides in 2020.

In New York so far in 2022, at least seven people were killed by strangers in a spate of disturbing homicides.

This year’s tally includes two killings that shocked the city — Michelle Go, who was shoved into the path of a Times Square subway on Jan. 15, and Christina Lee, who was followed into her Chinatown apartment building and stabbed to death by a homeless man on Feb. 13.

In another high-profile murder, a Kristal Bayron-Nieves, 19, who was working a night shift at an East Harlem Burger King was shot dead by an armed robber who wasn’t satisfied by the $100 in the register.

In Brooklyn, Dorothy Clarke-Rozier, 50, was walking to work at a supermarket on Feb. 8 when, police said, she was killed by a drunken, drug-addled stranger who drove a knife into her back. A law enforcement source described the attack as “completely random.”

In Queens, Cristobal Alfredo Ixquier Mejia, 19, was wearing a red jacket when he was shot to death Jan. 6 when two men took issue with the color of his clothes. Red is the signature color of the Bloods, but Mejia had no ties to a gang.

Jennifer Ynoa, 36, was walking her pitbull inside a Brooklyn bodega on Jan. 2 when a killer burst in gunning for a rival, but wound up killing her and her dog instead.

Eugene O’Donnell, a professor at the John Jay College of Criminal Justice and a former police officer, said that overall crime data show the city to be remarkably safe — but the increase in homicides involving strangers show things are “heading in the wrong direction.”

It’s the circumstances of a crime, not the statistics, that can truly shock the city, O’Donnell said.

“It’s actually a sad truth that you could have dozens of targeted killings that don’t raise any concern, public outrage or outcry, O’Donnell said.

But just one killing involving a victim with no connection to their attacker “can be really enough to electrify people’s perspective and really frighten people to the bone, depending on the time, the place, the manner that it happens — the subway, Central Park, somebody at work, somebody minding their own business, your average Jane or Joe cut down.”

He pointed to the 1990 killing of Brian Watkins, 22, a tourist and tennis fan from Utah who was in the city to see the U.S. Open. Watkins was knifed to death trying to protect his mother from a gang of muggers in a Midtown subway station.

Watkins’ death was one of 2,245 killings in the city in 1990 — a record number. In its aftermath, then-mayor David Dinkins hired 6,000 new police officers.

“That was like the one homicide that transformed the whole city. You don’t have to have a large number of these,” O’Donnell said.

“People leave the city because of these kind of crimes. People adjust their conduct, where they live, how they travel, where they send their kids, based on one crime.”