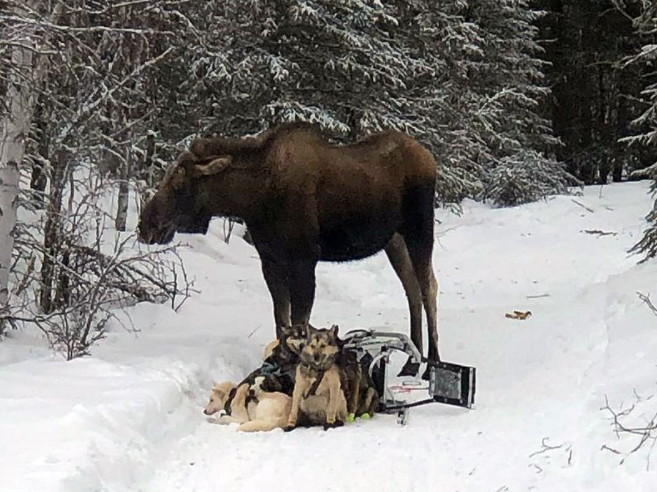 A bull moose spent nearly an hour stomping and attacking a rookie racer and her team of sled dogs amid a training run for the Iditarod in the frigid wilderness of Alaska.

Bridgette Watkins said the massive animal paid her little mind when she first spotted it on her 52-mile trek along Salcha River trail system, near Fairbanks. She told Outdoor Life she paused for the moose several more times, trying to keep plenty of space between them, and then suddenly it was charging at her.

The rookie racer aimed her .380 firearm at the animal, which had recently shed its antler, and then fired off half of its six rounds before it jammed. But the moose didn’t stop, so she dashed for cover beneath her sled, cleared the jam and then checked on her team. The moose was milling about her dogs, so she quickly cut free six of them, who were attached to snowmobile being driven by her friend and dog handler, Jen Nelson.

The moose again charged in their direction, prompting Watkins to fire another few rounds.

Instead of attacking the women, the moose turned his attention to the remaining four dogs.

“Any time a dog would move or bark, the moose would go into attack mode. Over and over and over,” Watkins told the magazine.

“And we would yell and hit things and scream and try to distract him. And when he would stop, we would talk to the dogs. Because they’re standing there looking at me, terrified, and I’d try to keep them calm.”

She continued: “‘C’mon buddy, just sit there, be quiet. I’m here, don’t move.’ And they were still. But if anybody would whimper or bark, the moose would get this look in his eye and start turning his head and be on top of them.”

In the end, Watkins, Nelson and the sled dogs were rescued by a friend, who lived about an hour away. He fatally shot the moose then with Watkins raced the two most injured dogs to the closest vet.

One of the pups, Flash, is still fighting for his life. He’s suffering a major head injury after getting stomped on by the moose. The other three on are the mend, though not entirely out of the woods.

“The rest of the team is home, inside and recovering. We have many bumps, bruises, cuts, puncture wounds, hoof prints and broken hearts. We are mending together and will see where this leads us in the next few days. Please pray for us all as we continue down this road.”