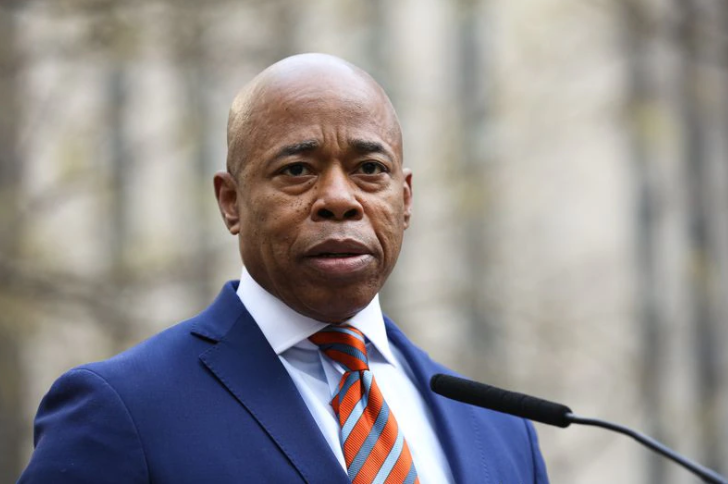 Mayor Adams plans to roll back the city’s coronavirus vaccine and mask mandates for indoor settings as infection rates continue to drop across New York.

The mayor didn’t give an exact timeline for when he envisions ending the longstanding pandemic precautions, but told reporters at an unrelated press conference in Brooklyn Wednesday that rescinding the “Key to NYC” vaccination requirement for dining and other indoor activities is a top priority for him.

Unprompted, Adams then suggested he’s also looking to relax or even outright scrap the city’s rules on mask-wearing.

“I look forward in the next few weeks to going through a real transformation that I don’t have to wonder what you look like. I will know what you look like again,” he said, motioning to masked reporters in the room.

Under current city rules, masks must be worn in schools, health care settings, many entertainment venues and while on public transit. The city also recommends that masks be worn in congested public indoor spaces, like grocery stores.

Coronavirus vaccinations, meantime, are mandated for most public indoor activities, like drinking and eating at restaurants and bars.

It was not immediately clear if Adams will opt to keep mask or vaccine rules in place for some settings. A City Hall spokesman declined to comment.

Adams’ remarks triggered speculation on social media that unvaccinated Brooklyn Nets point guard Kyrie Irving will be able to play home games at Barclays Center again after being barred from doing so because gyms and fitness centers are covered by the “Key to NYC” program.

But even if “Key to NYC” is lifted, Irving may not be able to play at Barclays because of the city’s private employer mandate, which requires vaccinations for all employees of Big Apple-based private companies, including the Brooklyn Nets.

Though he’s targeting “Key to NYC” for tweaks, Adams has no plans to revisit the private employer mandate, according to a City Hall official.

Other major U.S. cities, including Boston and Philadelphia, recently did away with their indoor vaccine mandates, citing a sharp decline in new infections.

New York has seen a similar trend, with the city’s average COVID-19 test positivity rate plummeting to 1.28% on Tuesday, according to data from the state Department of Health. Hospitalization rates are trending downward as well after months of increases driven by the extremely contagious omicron variant.

Still, dozens of New Yorkers continue to die from COVID-19 every day. Thirty-eight residents died Tuesday — 15 of them in the city, according to Health Department data.

Given the possibility for new COVID-19 variants, some public health experts have cautioned against viewing declining infection metrics as a springboard for rescinding pandemic precautions — especially vaccine mandates.

Varma made the case that COVID-19 immunity levels in populations fluctuate constantly — in part because the efficacy of vaccine protection wanes over time — and that it’s thereby critical to keep guardrails in place that incentivize inoculation as the threat of new, more infectious variants looms.

“That is why we are in a constant battle with this pandemic. I’m very concerned when people say we have reached a very high level of vaccination and that we can then take away vaccine mandates because what happens in the very likely scenario that we face a new variant in the future?” Varma told reporters.

“I really do worry about a place like New York, which has already experienced so much devastation. Now is not the time to celebrate. Now is the time to prepare.”

Since taking office last month, Adams has said he’s laser-focused on reviving the city’s pandemic-battered economy, including by peeling back or relaxing coronavirus-related public health restrictions.

At Wednesday’s press conference, Adams announced a new economic development team, which will include newly-appointed Economic Development Corporation President Andrew Kimball, that will be tasked with helping the city’s business sector rebound.

An early top priority for the team, Adams said, will be to convince companies to end remote work policies and order their employees back to their offices as much as possible.

“That’s what they are charged with,” he said. “One thing that can’t happen: You can’t stay home in your pajamas all day. That is not who we are as a city. You need to be out cross-pollinating ideas, interacting with humans. It is crucial. We are social creatures and we must socialize to get the energy that we need as a city.”