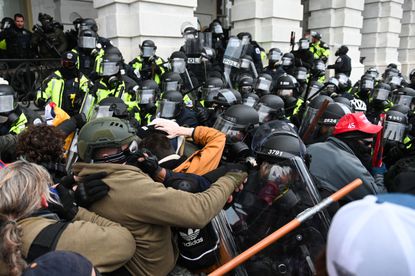 The Massachusetts teen who publicly outed her mom after recognizing her in video from a pro-Trump rally at the Capitol last week says she simply couldn’t stay mum.

Helena Duke, 18, told “Good Morning America” that she was emotional when she posted the viral tweet identifying her rowdy relative but didn’t regret it.

“If I did nothing, I felt that I was as bad as them,” Duke said, also referring to her aunt and uncle who attended the same event.

Duke’s mother Therese Duke was captured on video taken by FreedomNewsTV pursuing and yelling at a Black security guard during a demonstration at BLM Plaza in Washington, D.C., on Jan. 5, the night before a mob stormed the Capitol.

The video shows the 50-year-old mom striking the guard in her face before the shocked woman turned and defended herself, punching Therese in her own face.

Helena saw the images and went public, sharing them with a message that called out her mom’s bad behavior.

“Hi mom, remember the time you told me I shouldn’t go to BLM protests because they could get violent…this you?” she wrote in the caption.

In follow-up tweets, Helena identified herself as the “liberal lesbian of the family who has been kicked out multiple times for her views and for going to BLM protests.”

She started a GoFundMe fundraiser this week to help pay her way through college and hopefully become a lawyer. It raised more than $41,500 as of Wednesday afternoon.

“As you may know from recent twitter and news sources I have called out my mother for her actions. At the moment I have no idea how I will be paying for college as I have little financial support,” she said on the fundraising website. “I want to make the world a better place I just need some help.”

The Black woman who was hit in the face has been identified as Ashanti Smith, 28, a resident of the DC metro area.

Smith said on her own GoFundMe page that she was arrested at the scene and suspended from work for the incident.

“A video has surfaced where I was surrounded by a group of Trump extremists, and I honestly feared for my life. The video makes me look like I am the aggressor, but it does not show what happened prior to my defending myself,” she said.

“People shoved me, tried to take my phone and keys, yelled racial epithets at me, and tried to remove my mask. I asked them to social distance and stay out of my personal space due to COVID 19. They refused, and I was afraid of being hurt and harmed,” she said.

“After being assaulted, I defended myself. I am now facing criminal charges along with being relieved from my employment pending an investigation,” she said.

People had donated more than $136,000 to her fundraiser as of Wednesday afternoon.