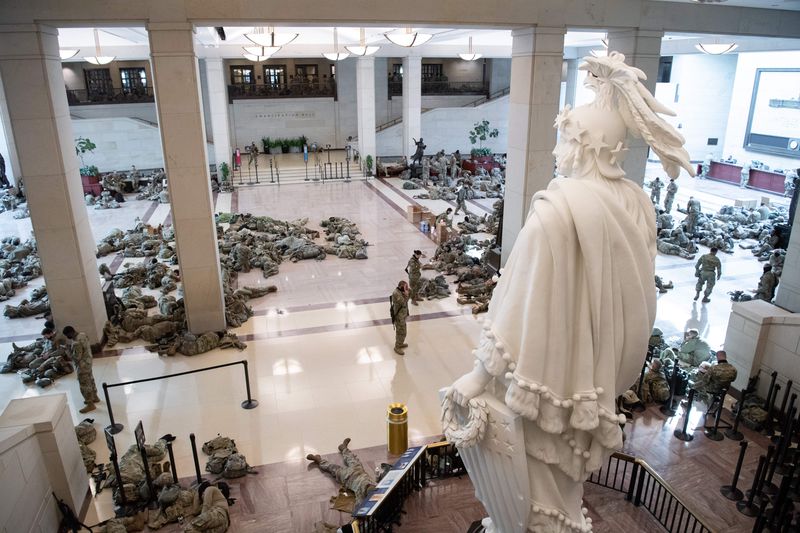 Hundreds of fatigue-clad National Guard troops, many of them heavily armed, were posted inside the U.S. Capitol during Wednesday’s historic impeachment of President Trump, as lawmakers warned that the building remained under a “severe security threat” in the wake of last week’s deadly attack.

Roughly 2,000 National Guard soldiers were on site Wednesday morning before the impeachment vote. Many were seen napping and catching some downtime on the marble floor in the Capitol’s visitors center, as the House began debate on an impeachment article charging Trump with inciting the Jan. 6 riot.

The troops expected to stay overnight at the Capitol and have not received specifics about the length of their deployments, a source familiar with the matter said.

They may be in for the long haul, as Pentagon officials said the Defense Department is expecting to have 20,000 National Guard soldiers in Washington by President-elect Joe Biden’s inauguration next Wednesday. That’s more than the number of U.S. troops currently stationed in Afghanistan and Iraq combined.

According to a source, many of the soldiers at the Capitol are wielding M4 assault rifles.

New York Rep. Hakeem Jeffries, the No. 5 Democrat in the House, said the major show of force was justified, since the FBI is warning that far-right groups may be planning more attacks against the Capitol and other government buildings before Trump leaves office.

“The attackers wanted to assassinate Nancy Pelosi, hang Mike Pence, and hunt down sitting members of Congress. That’s insurrection. That’s sedition. That’s lawlessness. That’s terror. It should not and will not be tolerated, and that’s why extraordinary security measures have been taken,” Jeffries told reporters. “The Capitol has responded in an appropriate way to meet the nature of the severe security threat that is being posed by domestic terrorists and white supremacists.”

On a lighter note, the troops were pleased to gain access Wednesday afternoon to the Capitol market inside the building to shop for food. “They’re getting MREs, but are happy to pay for something better,” a source said, using an acronym for the U.S. military-provided “Meal, Ready-to-Eat” bags.

House Speaker Nancy Pelosi (D-Calif.), whose office was ransacked during the attack, personally thanked some of the National Guard troops during a morning ceremony outside the Capitol.

“Even during this dark time in the history of America, we find reasons for hope,” Pelosi tweeted along with photos from the ceremony. “Thank you for your commitment to our American democracy.”

Biden, who has stayed at his home in Delaware through most of the past week’s chaos, pulled the plug Wednesday on plans to take an Amtrak train to his inauguration amid heightened security concerns, according to CNN.

Biden and Vice President-elect Kamala Harris also received a briefing from FBI and Secret Service officials about security precautions being taken ahead of the Jan. 20 inauguration, according to his transition team.

“The team is engaging with the current administration to gain as much information as possible on the threat picture, and on the preparations being put in place to deter and defend against violent disruptions or attacks,” the transition said in a statement.

The ramp-up in security marks a sharp contrast to last Wednesday’s assault, when Capitol Police officers were outnumbered by thousands of rioters who stormed the building directly after Trump encouraged them to “fight” to stop the congressional certification of Biden’s election.

Capitol Police Officer Brian Sicknick was killed in the attack, when an insurrectionist flung a fire extinguisher that hit the law enforcer in the head. An arrest has not yet been made in Sicknick’s death.

One attacker was also shot and killed during the Trump-incited mayhem, and three others died from medical emergencies.

FBI and Justice Department officials have charged more than 70 people so far with invading the Capitol. Several hundred more individuals are likely to face charges, according to law enforcement officials.