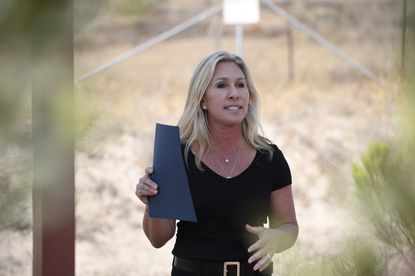 Greene, who has been vocally opposed to vaccines, mask mandates and other public health measures intended to quell the coronavirus pandemic, crossed a line when she tweeted false information over the weekend, causing them to be labeled “misleading,” CNET reported Monday.

In her tweets, she stated that the virus is only dangerous to obese people, or those over age 65. She also alluded to false claims of health problems causes by the vaccine, including high death rates.

The ban came after the White House pushed back against social media platforms that are enabling such misinformation to spread.

Greene has repeatedly refused to scale down her rhetoric, and in her most recent tweet she falsely claimed there had been “6,000 vax related deaths and many concerning side effects reported,” and that as a result “the vax should be a choice not a mandate for everyone.”

She also came out against masks, though she apologized last month after comparing mask mandates in the House of Representatives to the Holocaust.