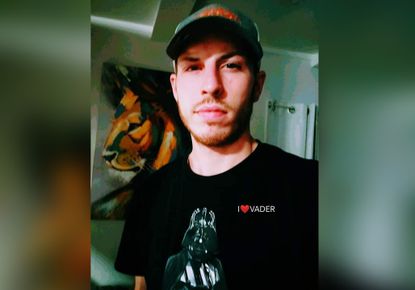 Joseph Leone Jr. visited his abusive father on Staten Island over the holidays to try and help him recover from a fall and a chronic drinking problem — and his dad repaid the son’s devotion by shooting him to death, the victim’s grief-stricken wife told reporters Sunday.

Joseph Leone Sr., 57, allegedly shot his 29-year-old son in the chest on the sidewalk outside the dad’s home on Bay St. near Scarboro Ave. in Rosebank about 7:25 p.m. Friday.

Medics rushed the victim to Staten Island University Hospital but he could not be saved.

“That shotgun in the garbage can — that’s the one I shot him with,” he told police, according to the criminal complaint against him.

Cops found two shotguns, a box with four shotgun shells, and several boxes of .45-caliber and .44-caliber ammo in the dad’s home, the complaint alleges.

Leone Sr. was arraigned Sunday for murder, manslaughter and charges related to having the shotguns without a permit. He was ordered held without bail.

“Joseph Leone is a former U.S. Marine with no criminal record. He is presumed innocent, and we caution the public from making any rush to judgement,” said S. Maquita Moody of the Legal Aid Society, which represented him at his arraignment Sunday. “We will have more to say on this matter in the coming days, weeks and months.”

About two weeks before his death, Leone Jr. told his wife his father had fallen down a flight of stairs at home.

“(The father) was still sitting on the stairs when he called Joe and told him that he needed help,” Kimberly Leone said.

“(Leone Jr.) had his own drug addiction but he recently went to rehab and got clean,” Kimberly explained, and added that her husband credited her with helping him beat his habit.

“He said, ‘I’ll have to go up there and help my daddy recover from alcohol like you helped me to recover from drugs,’” she said.

And so Leone Jr. traveled to New York to spend the holidays with his father — but his dad kept getting drunk at bars in the area, Kimberly Leone said.

A couple of days before the shooting Leone Sr. even threatened to shoot his son — but Leone Jr. didn’t think he meant it, according to Kimberly Leone, who remained home in South Carolina to take care of their kids.

Leone Jr. grew up in Brooklyn with three other siblings and joined the U.S. Army in 2010, his wife said.

“His dad was very abusive throughout his childhood. He always said that his dad beat him when he was little,” Kimberly Leone said. “I never really knew the extent of it because his daddy put on a really great face when I was around.”

Even after Leone Jr. joined the Army his dad berated him for not following in his father’s footsteps and becoming a Marine, she said.

Leone Jr. met his wife at an Army ceremony — her brother-in-law served with Leone Jr. at Fort Benning in Georgia.

Leone Jr. was going to be honored at a Turning Blue Ceremony where infantrymen receive the blue cord they wear on their uniform. But Leone Jr.’s family couldn’t make the event so Kimberly Leone’s sister asked her to do the honor of pinning him with the blue cord.

They married in 2013 and moved to South Carolina, where they lived with their three children, Nicholas, 8, Anthony, 3, and Gianna, 1.

Leone Jr. worked for a tree removal company with his wife’s cousin.

“They went on the road and when the hurricanes hit he worked with FEMA and he helped people recover,” his wife said.

Kimberly Leone said she fears her father-in-law will try to use an insanity defense or claim he was influenced by the cancer he suffers from.

“His dad should stay in jail,” Kimberly Leone said. “I know New York doesn’t do the death penalty — but they should.”