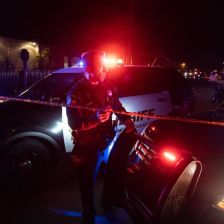 A 32-year-old man riding a scooter in the Bronx died died after he crashed into a turning box truck, police said Tuesday.

Wayne Vega was heading east on Food Center Drive on a Dualtron Ultra scooter when his slammed into a turning Hino box truck near the Hunts Point Coop Market about 6:15 a.m. Monday, cops said.

Medics rushed Vega to Lincoln Hospital but he could not be saved. He lived in East Harlem, according to police.

The truck driver was heading towards Vega and turning into his lane when the crash occurred.

The driver was not hurt and remained at the scene. No charges were immediately filed.