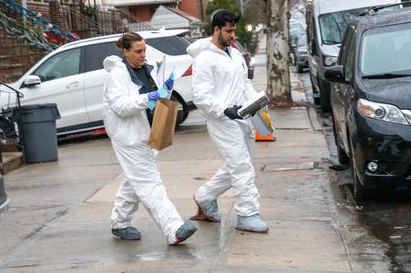 A man was fatally shot during a desperate struggle with a romantic rival inside a his girlfriend’s Brooklyn apartment early Saturday, police said .

Justin Moncada, 30, was visiting his girlfriend at her home on 83rd St. at 14th Ave. in Bensonhurst, when her former beau, Adam Thomas, 31, climbed through a front window for an uninvited visit just after 12:15 a.m., cops said.

The woman and Thomas had just broken up, said police sources, and Moncada, who has a 6-year-old daughter with the woman, had recently returned to New York from the West Coast, police sources said.

Moncada saw Thomas in the hallway and sprinted into the bedroom, shutting the door behind him, police sources said. Thomas followed, and the two struggled at the doorway, pushing the door back and forth between them as they fought, the sources said.

Thomas then opened fire at the bedroom door, blasting between 10 and 15 holes into it. One of the bullets hit Moncada in the head, killing him. Thomas then threatened to fatally shoot the woman, police sources said.

Meanwhile, the woman was calling 911, pleading for help during the harrowing attack. Cops arrived in time to grab Thomas and recover the gun. He’s charged with murder.

It’s not clear if the little girl witnessed any of the violence.

Unnerved neighbors described a chaotic scene — the sound of gunshots, the girlfriend’s panicked screams, and cops holding the suspect against a police car, his hands cuffed.

“I just heard the shots. I jumped up. I was watching TV, I heard the woman scream,” said a next-door neighbor who didn’t give his name. “She sounded frantic, like something terrible happened, and I heard her run outside when the police came.”

He added, “Police came and took the guy out who did the shooting. There was like a hundred cops out here. The woman went to the cops to speak to them outside.”

Neighbors said cops had been summoned to the house several times since the summer.

“There has always been a lot of commotion in that house and I think the cops have been there several times,” said neighbor Jerry Marino, 65. A couple of months ago, he said, he head a loud argument with a man living there and a second man.

“It’s concerning,” said another neighbor, who didn’t give his name. The neighborhood hasn’t been that way, and in 2021 you worry about what’s going on in the house next to you.