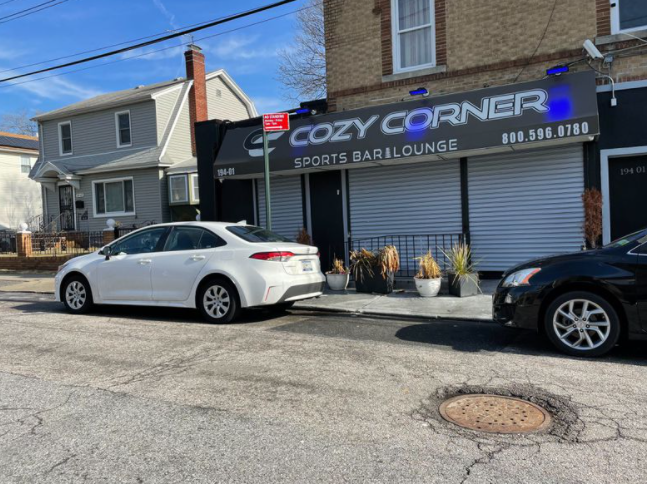 A man shot to death outside a Queens bar after a quarrel inside had just returned to live in the city after splitting up with his fiancee in Colorado, a relative said Tuesday.

Diquan Orr, 33, had never even been to the Cozy Corner Sports Bar and Lounge in St. Albans before — and had only returned to New York a couple of weeks ago, said his stepfather, Stephen Sookra, 47.

“We’re baffled,” Sookra said. “We’re still trying to figure this out. That’s not his character. I basically raised him. He was a good, outgoing, energetic guy. I can’t believe this.”

Cops said Orr got into an argument inside the bar shortly before 11:30 p.m. Monday. The dispute continued outside, where Orr was shot in the chest, police said.

Medics rushed Orr to Long Island Jewish Valley Stream but he could not be saved.

Police recovered four shell casings at the scene but have made no arrests.

Orr wasn’t the type to get into a disagreement with someone, relatives said. He was living temporarily with his mother and stepfather a few blocks from the bar until he got himself situated after the breakup, Sookra said.

Orr was looking for work and stayed busy making and posting videos online of man-in-the-street interviews about various subjects.

Sookra said Orr had planned to return home quickly when he went out Monday.

“It happened that quick, that’s fast,” Sookra said. “That was the first time he’d ever been there. He didn’t even have his coat. He told me he was going to the store, he was coming right back.”

“On the way back to the house, he stopped by there. He knew a person that was working there, I think a bartender or something. That’s the reason why he was there. It happened in less than like two, three minutes. He walked in and walked out and when he was walking out that’s when he got hit.”

Orr has a 10-year-old son who lives in North Carolina with his mother. Orr is also survived by three brothers, a sister and a mother who was trying to make sense of it all.

“She’s keeping it together,” Sookra said. “We’re still in shock. You see this s— every day on the news, and you’re like, ‘This s— is crazy.’ And then when it happens to you it’s unbelievable.”

“It’s unbelievable what’s going on with these guns and all that,” he added. “People are just dying for no reason.”

Sookra hasn’t given up on Mayor Adams turning the gun problem around.

The bar’s manager declined to comment about the shooting at the watering hole, where it was “Hip Hop and R&B Monday” on the night of the shooting.

A woman who lives near the bar said she heard a shot but no argument.

“This bar here has been a problem,” the woman said. “I’ve made several 311 calls, I have a list of them. We all complain about this. There’s always something going on at this place. Fighting, yelling, parking in front of our driveway, littering. They’re always hanging out in front of my yard.”

She said the bar has been open for about two years. There had been another bar there before that.

“We’ve been trying to get this place shut down,” she said. “We don’t mind a business at all but it’s just that they attract a very bad crowd. It’s an otherwise very quiet block. There’s not a lot of traffic, except for when this place is open.”

“It’s really sad, man. It’s really ridiculous,” Law said. “What could it have been? It couldn’t have been that serious.”

A friend of the victim visited the family’s house Tuesday after hearing of the shooting.

“I came from work. I literally just found out, and drove over here,” the friend said, declining to give his name. “He wasn’t like that at all, period. It has to be either mistaken identity or meant for someone else. He wasn’t aggressive at all. Everyone loves him. He was a very well-loved guy.”