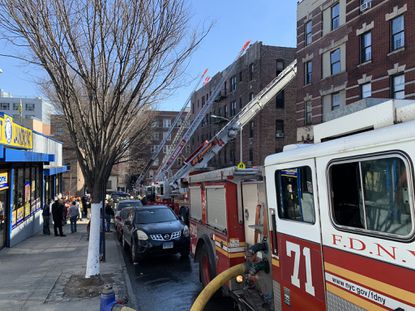 A raging three-alarm blaze spread through the walls of a Bronx apartment building Tuesday, killing a man and injuring eight firefighters.

The fire erupted just before 12:25 p.m. on the fourth floor of a five-story apartment building on W. 165th St. at Anderson Ave. in Highbridge, FDNY officials said Tuesday.

It quickly spread to the top floor, where firefighters found a 52-year-old man dead in a fifth-floor apartment.

“We believe it originated on the fourth floor and extended up to the fifth floor through the openings of the pipe recesses, where the plumbing pipes go up and down,” said FDNY Deputy Assistant Chief John Sarrocco.

The cause of the fire was under investigation. Authorities didn’t immediately release the victim’s name.