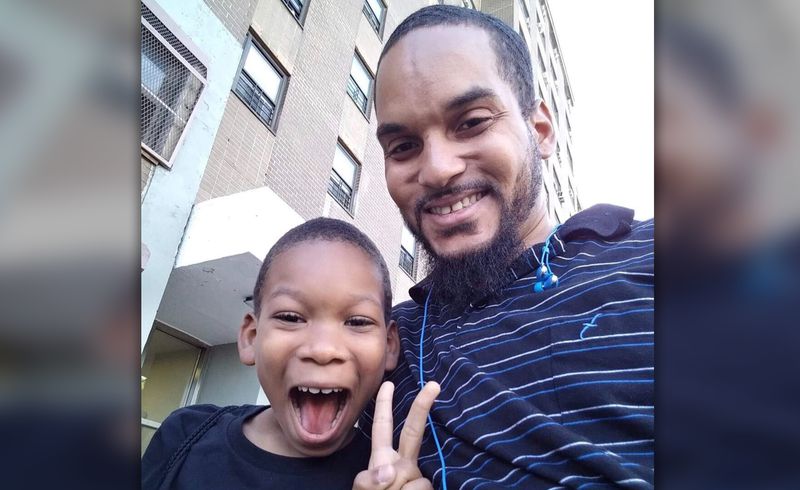 A Bronx father’s heart was left as broken as his slain 10-year-old son’s body.

Devastated dad Darnell Wolfe, 34, said in an interview that he blames the boy’s mother along with accused killer Ryan Cato for the savage two-day stomping that left a helpless Ayden Wolfe mortally wounded inside his Harlem apartment.

“You let the devil into this house,” said the devastated dad, fighting back tears, about his ex-fiancee. “She made a deal with this devil . . . It’s impossible that you don’t know what’s happening with our child.”

Prosecutors filled in the heinous details at a Manhattan arraignment where Cato, 34, was ordered held without bail on charges of murder and endangering the welfare of a child.

Last Friday, a neighbor in the Saint Nicholas Houses heard a series of loud bangs and thuds coming from the apartment for a full 40 minutes, court papers say. The violence continued Saturday, with the neighbor reporting a man’s screaming voice coming from the home.

“You thought yesterday was something?” he howled. “You think this s— is a game?”

Assistant District Attorney Nicole Blumberg recounted the grim litany of abuse inflicted on little Ayden, recalled by his dad as an aspiring artist with a big heart and an inquisitive mind.

“Covered from head to toe with bruises,” said the prosecutor. “He had bruises on both arms and hands, both legs, his head and his face, including behind his ears, his chest, his back, and even between the toes. The child had ribs broken on both sides of his body. Some ribs had multiple fractures.”

The boy’s alleged killer was sporting a swollen right hand when arrested, she added — but he insisted Ayden’s injuries happened outside the home. Cato’s explanation of his injured hand was inconsistent, with the suspect claiming the swelling was work-related, prosecutors said.

But a check of video surveillance indicated the 10-year-old never left the building on the day of his death.

“My son — where do I begin?” asked Darnell Wolfe. “He had charisma. He just shined. His personality was amazing. If only you could see how much love he had. That was my son.”

The father only learned about the death through calls from friends extending their condolences after they heard about the heartbreaking case in the news. The boy was unconscious and soaking wet in the bathtub from a failed attempt to revive him when first responders arrived this past Saturday.

“It blew my mind,” said Wolfe.

Wolfe says he last spoke with the mother in June after she moved to the NYCHA apartment. The couple was engaged before his fiancee disappeared with their son, and now Wolfe has nothing left but memories.

“He touched a lot of people,” said Wolfe of little Ayden. “He touched everyone. When we talked, it was amazing. He would ask a lot of questions. He was so curious.”

The father was instead left looking for answers in the shocking death of his boy, including whether his ex-love would face charges in the death.

A relative told Sunday that Ayden’s mom was a brain cancer survivor who was told as a teenager she’d never have children — a prognosis she proved wrong when she gave birth to Ayden, her only child.

The mom’s cousin, who gave her first name, Jennifer, said she last saw Ayden around the holidays and spoke to his mother just a few weeks ago.

“I’ve never seen a bruise, a scratch or anything on him,” Jennifer said of Ayden. “They were always together, inseparable. And she was very protective over him. She was a good mom. I don’t understand what happened, what went wrong.”

“That boy was everything to her,” the cousin added. “She would never hurt Ayden. She just would not. Something had to go terribly wrong. I don’t think this was her at all.”

Wolfe never met his son’s alleged killer, who has a prior arrest three months ago for allegedly choking the mother of his two kids as the children watched inside their Williamsburg, Brooklyn, home.

“We have no clue,” Wolfe said of the boy’s alleged killer. “I’m very unsettled about that. I’m outraged … What I need right now is justice for my son. My son needs justice.”