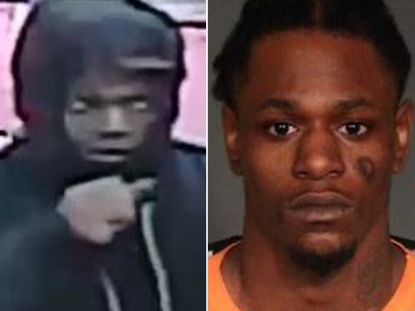 The outraged widow of a Brooklyn murder victim wanted answers and an arrest Wednesday after a Correction Department snafu put the accused killer back on the street.

The manhunt continued for missing suspect Christopher Buggs, 26, who was supposed to be held without as he awaits trial for allegedly pumping three bullets into the chest of Ernest Brownlee, 55, at a Brooklyn deli three years ago.

“They need to find this guy,” Brownlee’s widow Winifred Mackins, 55, to the Daily News. “I don’t like this. I’m angry. I’m (feeling) everything.”

“It’s been really rough,” she said of her husband’s slaying. “I still wake up looking for him.”

Buggs received his undeserved reprieve after a clerical error, officials said. He was sentenced to 30 days of time served on a separate criminal contempt charge and that decision was incredibly mistakenly listed as the final disposition of the murder charge, sources said.

Rikers staffers failed to note the obvious mistake and Buggs was sent on his way from the Otis Bantum Correctional Center.

“We are aware of this incident, and a full investigation into how this happened is underway,” said Correction spokesman Peter Thorne. “Right now we are working with our law enforcement partners to return this individual to custody.”

Brownlee was an ex-con who killed two men in the 1980s, although family members said he did time and came out a different man.

He was walking out of the B&G Deli and Food Corp. on Vernon Ave., near Throop Ave., in Bedford-Stuyvesant with his order of pepper steak with rice and beans when he was blasted three times in the chest about 12:40 p.m. on Feb. 29, 2018.

“He was kind and generous to me and the kids,” his widow said Wednesday. “His grandkids still come to stay and say, ‘Hey grandma, where’s grandpa at?’”