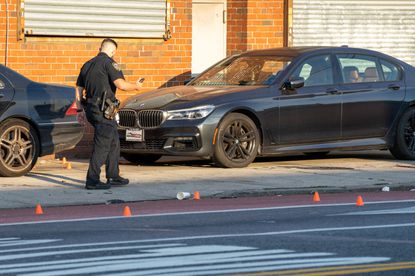 A 31-year-old man shot in the legs during a gunfight outside a Brooklyn nightclub has died — and one of the three wounded survivors is an off-duty U.S. Park Police officer, cops said Tuesday.

Joshua Cooper died at Kings County Hospital on Monday, three days after getting into a gunfight with the Park Police officer and two other men outside the CZ Lounge in East Flatbush.

The 36-year-old off-duty officer, who is assigned to the New York City field office, and a 25-year-old woman were walking to his car after leaving the club on Utica Ave. near E. 49th St. about 3 a.m. Saturday when a pair of muggers approached, one with a gun in his hand, police sources said.

When the armed duo demanded the Park Police officer’s belongings, he pulled his own gun, sparking a shootout, authorities said.

As the Park Police officer and robbers exchanged fire, a third man joined in, pulling his own gun and firing, cops were told.

When cops arrived, the Park Police officer and the woman were found wounded outside the club. The officer had been hit four times in his arm, stomach, chest and thigh. His companion had been hit in the chest. Both were taken to Kings County Hospital, where the officer had to undergo two surgeries.

“The surgery was to remove one of his kidneys and part of his colon,” former U.S. Park Police Officer John Shultz wrote on Facebook. “His liver was also lacerated. Prayers for our officer and his family.”

The woman the officer was with is also expected to survive, officials said.

As cops investigated, they learned that a 28-year-old man shot in the chest and buttocks had fled the scene. He was later found bleeding outside a gas station two blocks away and was taken to Kings County Hospital, cops said.

Someone drove Cooper, shot in the thigh, ankle and foot, to Kings County Hospital, where he clung to life for three days.

Sources say Cooper is a member of the Mob Stars street crew, which is affiliated with the Bloods.

A spokeswoman for the Park Police referred all calls for comment to the NYPD.

Neighbors said they were surprised about the violence outside the lounge, which sells Jamaican-style seafood.

“Its a nice place,” said one man walking by the club Saturday. “I would buy food from there and leave. Nice people there.”