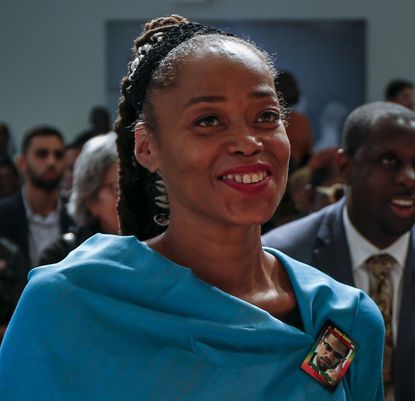 The daughter of the late Malcolm X was found dead in her Brooklyn home Monday night, police sources said.

Malikah Shabazz, 56, who with twin Malaak were the youngest of six daughters of Malcolm X and wife Betty Shabazz, was found by her daughter Bettih-Bahiyah Shabazz, 23, in the home they shared on E. 28th St., sources said.

Police do not believe her death was suspicious, cops said.

Malaak and Malikah were born seven months after their human rights and civil rights activist father was assassinated Feb. 21, 1965.

Her death comes just four days after a Manhattan court exonerated two of the men convicted of Malcolm X’s killing.

Malcolm X, at 39, was shot 16 times before a crowd of 400 people in Harlem’s Audubon Ballroom, including his pregnant wife and three of their daughters. One of the killers blasted the victim from close range with a shotgun.

On Thursday, at the request of Manhattan District Attorney Cyrus Vance, a judge vacated the convictions of Muhammed Aziz and Khalil Islam. Aziz, 83, was paroled in 1985 after two decades in prison, but long maintained his innocence, as did Islam, who was paroled in 1987 and died in 2009.

Mujahid Abdul Halim, who admitted repeatedly shooting the Malcolm as he lay helpless on the ballroom stage, acknowledged to his co-defendants as they waited together in a cell that both were innocent.