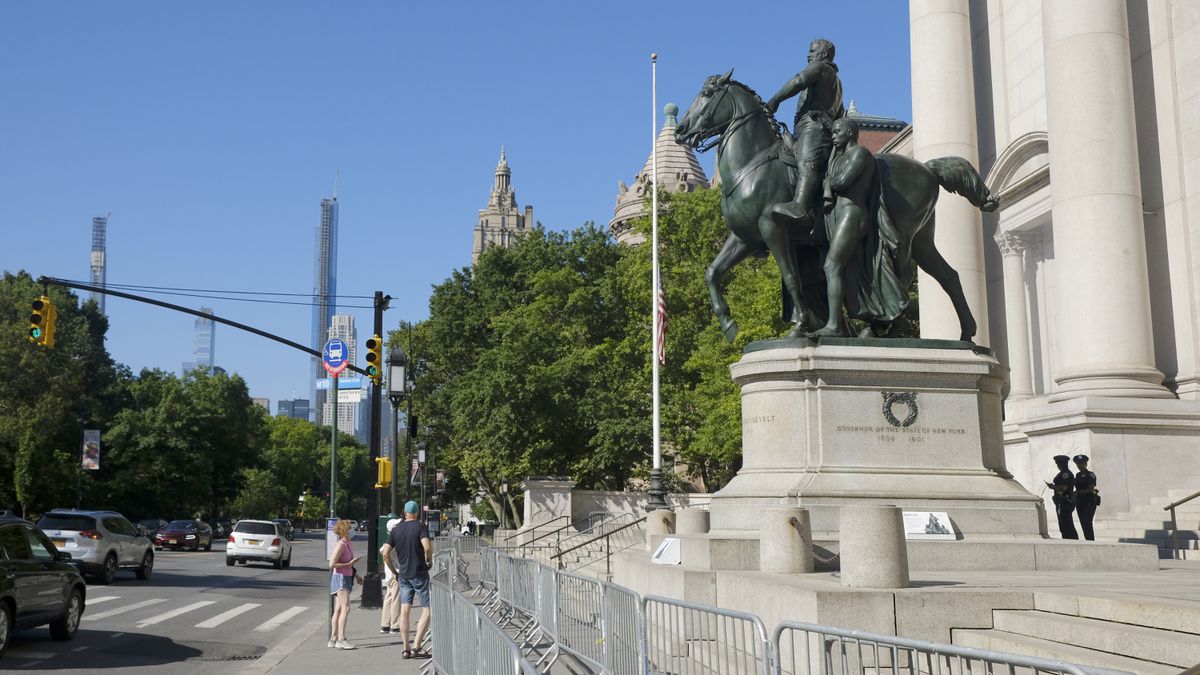 The Rough Rider is mounting up and moving on.

An American Museum of Natural History statue of former President Theodore Roosevelt, which has been criticized for glorifying colonialism and racial discrimination, is being relocated to North Dakota.

For 80 years the Roosevelt statue stood sentry outside the museum, riding a horse and towering over an African man and a Native American man. Roosevelt’s own descendants conceded the depiction is “troubling” and signed off on the statue’s removal.

Now, T.R. is headed for Medora, N.D., where the Theodore Roosevelt Presidential Library is set to open in 2026 — the 250th anniversary of the United States.

“We are grateful to the Theodore Roosevelt Presidential Library for proposing a fitting new home for the Equestrian Statue,” said Vicki Been, the city’s deputy mayor for housing and economic development. “This long-term loan would allow an important part of the city’s art collection to be appropriately contextualized, and we look forward to continuing to work with the library on next steps.”

Although Roosevelt was born in Manhattan,and was governor of New York before running the country, his library will be built on a site near Theodore Roosevelt National Park, which preserves landscapes the pioneering conservationist visited in between 1883 and 1887.

“The Equestrian Statue is problematic in its hierarchical depiction of its subjects and should be removed,” Theodore Roosevelt V said in a statement. “Rather than burying a troubling work of art, we ought to learn from it. It is fitting that the statue is being relocated to a place where its composition can be recontextualized to facilitate difficult, complex and inclusive discussions.”

Roosevelt was a founding member of the Upper West Side museum. The nation’s 26th president is also closely associated with South Dakota, where his face is etched on Mount Rushmore, along with presidents George Washington, Thomas Jefferson and Abraham Lincoln.

The Equestrian Statue, designed by James Earle Fraser, may undergo some changes before it is put back on display, according to the library commission.

Vice President Roosevelt became the nation’s youngest president when, at the age of 46, he took over for William McKinley, who was assassinated in 1901.

More than a decade earlier, during the Spanish American War, Roosevelt resigned from his post as Assistant Secretary of the Navy and formed a volunteer cavalry regiment that gained notoriety as the “Rough Riders.”

The statue was vandalized with red paint in 2017. Last year, Mayor de Blasio called the statue “problematic” amid a racial reckoning caused by the police killing of George Floyd.