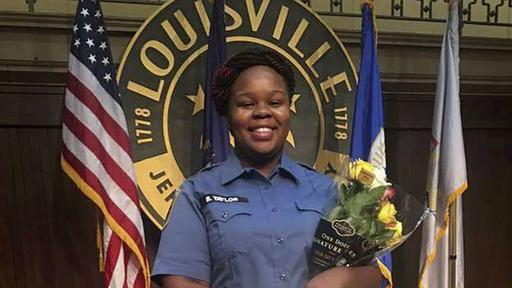 A Louisville police officer involved in the March raid during which Breonna Taylor was killed said in his first interview since the incident that it had “nothing to do with race.”

“This is not relatable to George Floyd. This is nothing like that,” Sgt. Jonathan Mattingly told ABC News and the Louisville Courier Journal.

“It’s not Ahmaud Arbery. It’s nothing like it. These are two totally different types of incidences. It’s not a race thing like people wanna try to make it to be. It’s not.”

Taylor, a 26-year-old Black woman, was asleep in bed with her boyfriend, Kenneth Walker, when Mattingly and two other officers, Brett Hankison and Myles Cosgrove, burst into her home around 12:40 a.m.

She was shot six times during the botched narcotics raid, which did not turn up any evidence of drugs in the Louisville home. Mattingly, a 20-year veteran of the Louisville Metro Police Department, was also struck when Walker fired off his weapon, thinking he and his girlfriend were being robbed.

Taylor’s death sparked months of protests in Louisville, which have only been further fueled by a lack of charges in her killing.

A grand jury last month indicted Hankison on wanton endangerment charges for allegedly firing shots that penetrated a wall and entered a nearby apartment. He pleaded not guilty and has also since been fired from the police force.

The death of George Floyd in May ignited a wave of demonstrations across the country, demanding systemic change and justice in the case. The 46-year-old died in Minneapolis on Memorial Day after an officer knelt down on his neck for an extended period of time.

The officer, Derek Chauvin, has been charged with second-degree murder and manslaughter.

Floyd’s killing also sparked a renewed interest in Taylor’s case as well as in the February death of Ahmaud Arbery, a 25-year-old Black man, who was shot and killed while jogging in Georgia. Gregory and Travis McMichael, a white father and son, were charged in May with murder.

“This is a point where we were doing our job, we gave too much time when we go in, I get shot, we returned fire,” Mattingly said in the interview.

“This is not us going, hunting somebody down. This is not kneeling on a neck. It’s nothing like that.”