Jacob Blake shares video from hospital: ‘Every 24 hours, it’s nothing but pain’ 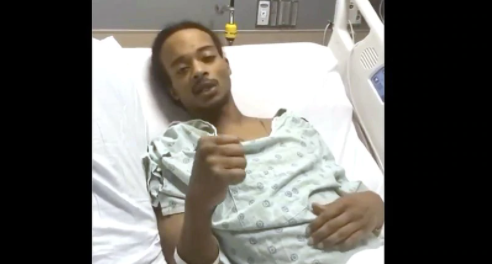 Jacob Blake on Saturday made his first public statement since a police officer shot him in the back seven times Aug. 23.

In a video shared by attorney Ben Crump on Twitter, Blake, 29, encouraged people to live life to the fullest and described the pain he’s dealing with since being shot by Kenosha, Wis., Officer Rusten Sheskey.

He is paralyzed from the waist down.

“There’s a lot more life to live out there. Your life, and not just your life, your legs . . . can be taken from you like this,” Blake said before snapping his fingers. “Every 24 hours is pain; it’s nothing but pain. It hurts to breathe. It hurts to sleep. It hurts to move from side to side. It hurts to eat.”

Sheskey is accused of shooting Blake in the back seven times by the driver’s door of a car that contained Blake’s children — ages 3, 5 and 8. Police were responding to a call about a domestic disturbance.

An investigation of the shooting is being conducted by the Wisconsin Department of Justice.

The shooting led to protests, including one in which two people were shot dead. Kyle Rittenhouse, 17, has been charged in those killings.

Blake’s first public appearance since the shooting came Friday when he pleaded not guilty to domestic abuse charges from an alleged incident months earlier.