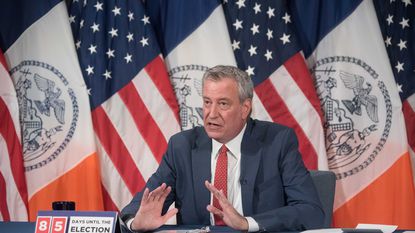 An uptick in coronavirus cases in southern Brooklyn has left top city officials scratching their heads over the cause of the increase and scrambling to test as many residents as possible.

Sunset Park, with its approximately 38,000 households, has seen 228 people test positive for COVID-19 over a two-week span. Those results stem from more than 3,300 people who were tested.

“It’s a warning light,” Mayor de Blasio said during a Wednesday morning press briefing. “It may be aberrant. It may be something more.”

De Blasio was quick to point out that while the uptick stems from tests conducted in Sunset Park, not all of those tested are residents of the area.

“It’s not that we have a perfect bead on exactly what’s happening yet,” he said. “The idea is to go and do much more testing to see if it either clarifies that that was an aberrant reality or shows us something that we can follow up on more distinctly.”

Citywide, coronavirus stats remain relatively low with the percentage of city residents testing positive for the disease at one percent.

De Blasio and the city’s Health Commissioner Dave Chokshi said the plan to root out the cause of the Sunset Park uptick will rely on saturating the area with robocalls, getting the word out to community groups and door-knocking residents to encourage them and their families to get tested.

“We’ll turbocharge our activity in the days ahead,” Choksi said. “We’ll bring two mobile testing vans, each of which can do 80 to 100 tests per day.”

The city is also encouraging those who test positive to talk with its contact tracers to determine how the virus may have spread and to whom.

Anabel Palma, chief equity officer of the city’s Test & Trace Corps, said as of July 29 in Sunset Park, there were 104 positive COVID cases. Of those, 80 people completed the test and trace intake process and supplied the city with 130 more contacts.