How the COVID-19 pandemic has impacted NYC’s hungry 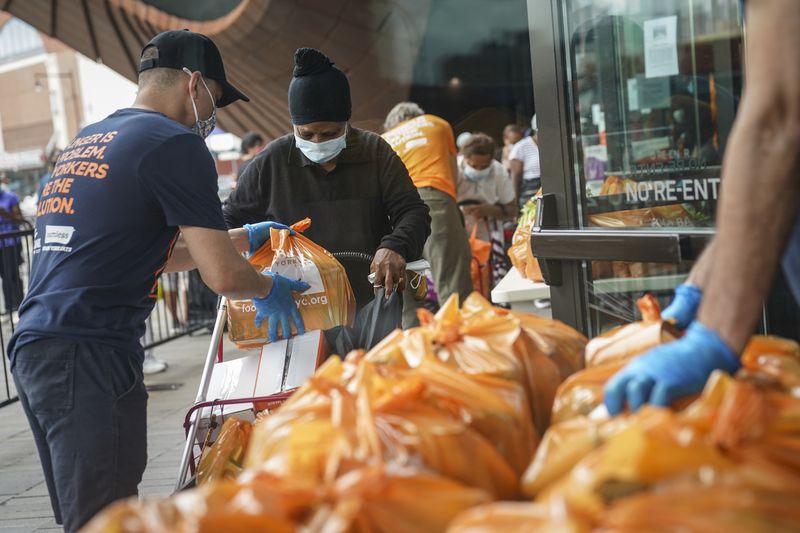 First came coronavirus, then came the cry for food.

In the past six months, the city has waged an all-out war on hunger — an old, familiar foe whose grip grew stronger during the darkest days of the pandemic.

COVID-19 forced nearly one-third of the city’s food pantries — most dependent on senior citizen volunteers — to shut down. The closures led to massive turnouts at those that remained open for families, some walking as far as Coney Island to Park Slope just for a grab-and-go meal.

Mayor de Blasio appointed a food czar to run a cross-agency effort to feed the hungry. The city served more than 130 million free meals to New Yorkers in need, invested $25 million to help local soup kitchens and pantries, and created a Food Reserve to “bolster our capacity to support this network in the future,” the Mayor’s Management Report says.

Before coronavirus, over 1 million people in New York City — nearly 53 times the number of seats in Madison Square Garden — were considered food insecure, according to the latest data from Feeding America. That figure is expected to skyrocket 38% by the end of the year.

By all accounts, including those from folks at the major food banks, local pantries and advocacy organizations, the city met the crisis head on, and with a swift sense of urgency. Yet as the cool weather begins to settle in against the threat of a possible second wave of coronavirus, some wonder whether the city’s response will hold fast.

“I’m often a critic, that’s my role … but the city has been committed, and — for someone who’s dealt with food issues for many years — that’s a very big deal,” Community Food Advocates Executive Director Liz Accles told the Daily News.

“What’s happening right now in many ways has been game-changing,” she continued. “So what do we learn from this, and how do we build on this — not just with the next emergency, but how [do we] address the ongoing food needs that people have? You can’t go back to what was. It’s got to be something different.”

In late March, FoodBankNYC and City Harvest, the two major organizations that funnel goods and funding to kitchens and pantries, went into overdrive. FoodBankNYC distributed over 50 million meals in the last six months — nearly double the average rate of monthly meals it typically parcels out — while City Harvest distributed over 56 million pounds of food from March through August, a 79% increase over the same period last year.

The pantries and kitchens that partner with FoodBankNYC that reported an uptick in people during the pandemic reported a 91% increase in first-time visitors, said FoodBankNYC spokeswoman Jenna Lee Russo.

“People were in such a panic for food, they would go anywhere to get it,” said Russo. “A lot of these agencies are run by seniors, too … so they had to close [or] change their models on a dime to meet the demand.

“COVID shined a light on hunger and poverty in the city more than ever before — but it’s really a problem that’s always been there. And now it’s worse.”

One indicator of current food insecurity numbers — which are likely much higher due to census undercount — is unemployment, said City Harvest Associate Director of Policy and Governmental Relations Jerome Nathaniel.

Legislation could help reverse the tide, Nathaniel said. The Senate is expected to vote this week on the Heroes Act — a comprehensive $2.2 trillion coronavirus recovery package that, in its current state, promises to restore federal unemployment benefits and increase Supplemental Nutrition Assistance Program (SNAP) benefits by 15%.

“The sheer volume of applications received by the agency during the emergency is indicative of the heightened need for food security resources at this time,” she continued.

That need is on display every day at Holy Apostles Soup Kitchen in Chelsea, said the nonprofit’s director of development and communications, Nichole Guerra. Its pantry doles out 22,000 meals a week — up from 840 before the pandemic — and its kitchen feeds about 1,000 people every day.

“We were able to purchase that food because we got city and state funding — but we’re really nervous about with what’s to come, and how we’re going to sustain that level of food distribution,” said Guerra, standing outside the church near a line of people waiting for a hot meal.

“We have a very loyal donor base … but a lot of them gave their gift earlier in the year so we could have what we needed to stay open — so now we’re worrying,” she said. “Our guests are definitely grateful we’re here. … We just want to do whatever we can do to keep helping them through the winter.”