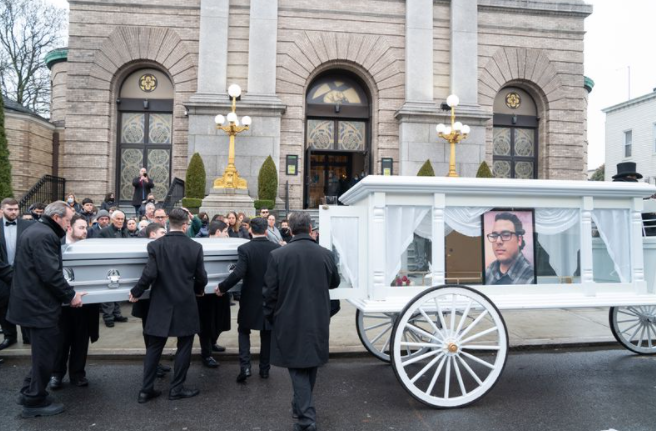 The body of stabbing victim Anthony D’Onofrio, just 22, arrived in a horse-drawn hearse Thursday outside St. Finbar Catholic Church for a sad farewell only five days after the fatal attack outside a problem-plagued Brooklyn bar. His heartbroken father rode alongside the driver of the white carriage adorned with a large photo of the victim.

“Anthony was one of the best guys in the business,” said fellow Central Park carriage horse driver Christina Hansen, one of several hundred mourners inside a church where loud sobs echoed during the funeral. “He was the real deal …. It’s a tragic and senseless death.”

The clip-clop of the horse’s hooves offered the only sound on a gray wintry morning until the mourners began crying upon the body’s arrival after a melancholy one-mile ride from the Scarpaci Funeral Home. The carriage took a detour to pass by the victim’s family home and other personal neighborhood landmarks.

Family friend Ariel Fintzi offered fond recollections of D’Onofrio and of his love of the carriage business.

“Anthony touched all of us so deeply,” he told the crowded church. “He was the best … I can’t even tell you how good he was. He would make people so happy, taking them on a carriage ride.

“He was the cowboy of Central Park. He will be with us forever.”

According to friends, D’Onofrio — a well-known second-generation member of the city’s carriage horse community since he was age 8 — was in the wrong place at the wrong time when he was targeted in the 10-man melee Saturday outside Catrinas Mexican Grill.

A police source said video shows D’Onofrio was about to drive some of his friends home, warming up his car while cleaning snow off it, when the melee broke out.

His friend who suffered a slash wound told police he too was cleaning off his car when the fight broke out. He said he didn’t know any of the brawlers, but one ran up to him and hit them in the head.

D’Onofrio attempted to defuse the situation and protect his pal before he was stabbed, police sources said.

The bar was cited on several occasions before the stabbing by the state Division of Alcoholic Beverage Control, including a November threat of closure for allegedly serving underage customers, failure to keep adequate business records and for “noise, disturbance or misconduct” inside and outside the business.

The three-page complaint also described Catrinas as “a focal point for police attention.”

Cops arrested murder suspect Kevin Cuatlacuati, 19, alleging that he attacked D’Onofrio outside the restaurant around 3:45 a.m., fatally stabbing the young man and slashing the victim’s friend in the head.

The suspect was taken into custody after turning up at NYU Langone Hospital-Brooklyn with a gash to his hand, with authorities grabbing a knife found on the suspect when they searched him there, officials said.

Cuatlacuati claimed he cut himself cooking when questioned by cops, according to prosecutors.

He was ordered held without bail on charges of murder, weapon possession and assault at a Tuesday arraignment in Brooklyn Criminal Court.

The victim’s father, Giuseppe D’Onofrio, told The News Wednesday his son’s organs will be donated with the family’s blessing; the younger D’Onofrio signed up to be a donor at 16, when he got his driver’s license.

“What can I say?” the father said. “All I did, I worked for 22 years, tried to get him a good education, send him to pilot school and send him into a carriage license.”

TWU Local 100 head Tony Utano, whose union represents the horse carriage drivers, recalled how proud the slain man’s dad was of his son.

“His father told me a story,” said Utano. “[Anthony] used to take his tips and give them to the homeless people. This kid was studying to be a pilot and people said, ‘Someday you’re going to be up there.’ This is not how he wanted to be up there.”