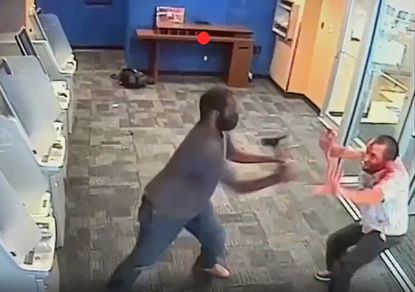 A hatchet-wielding maniac was in police custody after he repeatedly hacked a defenseless man in the head and leg in a shocking, caught-on-camera ambush inside a Manhattan bank ATM, police sources said.

A suspect in Sunday’s terrifying assault was taken into custody late Tuesday, and taken to Bellevue Hospital for evaluation, the sources said. No further information about him was immediately available.

Miguel Solorzana, 50, was still recovering at Bellevue Hospital from the mind-boggling madness.

In video of the gruesome Sunday attack, the assailant is seen on video casually walking into the facility with a bank of ATMs, holding a hatchet in his right hand — and then suddenly lunging at Solorzana, who seemed not to even notice the attacker until he was under siege.

“He hit me. In the bank, he hit me,” Solorzana told reporters, speaking in Spanish.

Solorzana had been at an ATM at the Chase bank on Broadway near Morris St. about 5:20 p.m. when the assailant, who wore a black mask over his face, initially walked behind him — but then suddenly turned around and swung the hatchet at Solorzana’s leg.

The Queens resident, clutching his backpack in front of him, valiantly tries to defend himself, but the attacker shoves and grabs him, swinging the hatchet at his head as the overpowered victim tries to wrest it away, the video shows.

After the attack, the suspect is seen angrily stomping over to each of the bank’s ATMs, smashing the screens with his hatchet, before dropping the weapon and walking away, the video shows.

“The whole family is in Mexico,” Manny said. “I didn’t ask him about what happened, i just wanted to make sure he’s okay.”