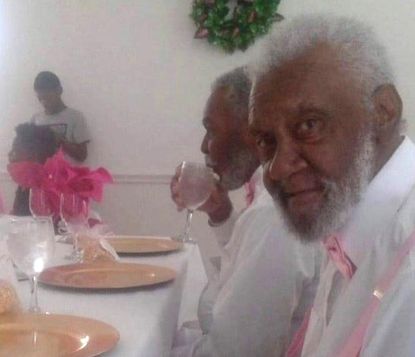 A Staten Island mom who worked as a live-in home health aide to an 80-year-old man found beaten to death with “I touch little girls” scrawled in marker across his bare chest was in custody Wednesday for assaulting her 3-year-old daughter — as cops probed whether she has any connection to the bizarre slaying, a source told reporters.

Renee Ayarde, 28, and her daughter lived with octogenarian victim Robert Raynor, who was discovered dead Monday morning face up with his hands stretched over his head in the first-floor hallway of his Corson Ave. home in Tompkinsville.

Ayarde has not been named as a suspect in Raynor’s death, which cops announced Wednesday has been officially deemed a homicide.

The 80-year-old victim’s infuriated daughter insisted Wednesday her father was no pedophile.

Raynor’s daughter Carolyn Whetstone was looking for answers in the shocking death and expressed her outrage over the comments written on her dad’s corpse.

“That’s not my father,” Whetstone told reporters from her North Carolina home. “He would not touch a child. He would never violate anyone. He’s got daughters and granddaughters that he’s watched when he’s come to visit me … That’s not him. That’s not true.”

Whetstone said her father was stricken with cancer and suffered from arthritic knees “so he didn’t have the physical ability to do that.”

Raynor’s death was officially declared a homicide Wednesday by police, with the cause of death cited as blunt trauma to the head and torso. A police source indicated Ayarde hasn’t been ruled out as a suspect in the fatal beating.

Ayarde was arrested twice in the last five months, most recently for assaulting her 3-year-old daughter just six hours after Raynor’s body was discovered in the hallway outside the apartment he shared with the home health aide and her child, police said.

Ayarde allegedly dropped her daughter onto the concrete and dragged her along Hester St. near Eldridge St. on the Lower East Side about 3:45 p.m. Monday, then threw a full water bottle at the defenseless girl’s face, according to authorities.

As she screamed at the crying tot, a passerby called 911 and Ayarde grabbed the cellphone out of the woman’s hands, knocking her to the ground and leaving her scratched and bruised, prosecutors charge.

“Are you calling the police? Give me your phone,” Ayarde bellowed according to court papers.

Ayarde’s little daughter was taken to a hospital with bruising to her neck — and investigators found old injuries in various states of healing still visible on the girl’s knees, face, and cheek, according to the criminal complaint.

“I was outside and Mommy threw me on the floor,” the daughter told investigators, court papers say.

Ayarde was ordered held on $5,000 bail when she was arraigned on charges of assaulting a child in Manhattan Criminal Court Wednesday morning.

Ayarde also has an ongoing case over a March 1 arrest on Staten Island for driving a car with a missing front passenger side window and the wrong license plate, police said. Ayarde refused to provide police with any documentation for the car and faces charges including gun possession, driving without a license and resisting arrest.

“I don’t abide by the rules of the U.S.,” she told the arresting officers, according to a source. “I invoke my Fifth Amendment right.”

Investigators believe Raynor’s body was dragged into the hallway from his rear first-floor apartment, sources said.

A neighbor who discovered the body confirmed the message written in black marker, adding the phrase “I take dolls in my room for girls ages 1-5″ was also inked across his stomach. Sources with knowledge of the investigation said Raynor also had the words “I touch” written on one of his feet.

“I saw him lying there. I didn’t get too close. The man was just dead,” neighbor Isaac Williams, 40, who lives in an apartment upstairs and found the body, told reporters Tuesday. “What was written on his chest was just disrespectful.”

According to Whetstone, her father was living with Ayarde and her daughter for several years due to his health problems. Whetstone was unable to reach her dad by phone for a year during the pandemic before finally calling police to make a wellness check on him.

“When I finally did talk to him last month he told me he was barely able to move,” the daughter said of his worsening health. “It was that bad.”

Whetstone offered a fond recollection of her father: “He was a fun person. He liked joking around. All he liked to do was have fun.”

Raynor was first arrested in 1987 when he was charged with two assaults. He was arrested for assault again in 1992 and drug possession in 1996, sources said.

He was arrested repeatedly over the next 20 years but for minor offenses that remain sealed. His last arrest was in 2014, sources said, when Raynor was 73 years old.

Neighbors said Raynor was disabled, needed a walker to get around and complained about his arthritis.

“Friday, he said to me, ‘The Lord is not ready for me yet,’” neighbor Monique Simon said. “Those were his very words. I guess now it’s between him and God.”