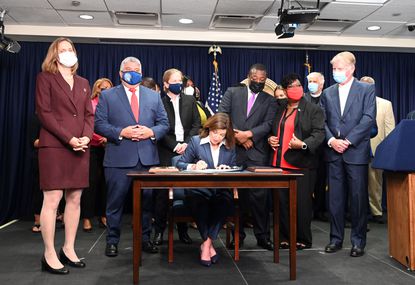 Gov. Hochul ordered the immediate release of 191 Rikers Island inmates on Friday and signed a bill that paves the way for even more prisoners to be set free as conditions at the overcrowded city jail continue to deteriorate.

The newly freed inmates landed behind bars for technical parole violations, like missing a curfew, consuming alcohol or being late for an appointment with a probation officer, and Hochul said they shouldn’t have been at Rikers to begin with.

“It doesn’t make us any safer,” she said during a press conference at her Midtown Manhattan office. “These people weren’t a danger in the first place.”

In addition to ordering the releases, Hochul said she’s directing her Department of Corrections to start the process of transferring 200 Rikers inmates into state prison facilities.

The actions were taken in the spirit of the “Less Is More Act,” a bill Hochul signed as part of her Friday press conference that makes it so that parolees aren’t locked up if they violate technical conditions of their supervised release. The bill, however, doesn’t take effect until March 2022, and Hochul said that’s why she decided to take matters into her own hands in the interim.

It was not immediately clear how many Rikers inmates are eligible for release beyond the 191 granted immediate freedom. About 6,000 inmates are currently being housed on the island — double of what the population was in July 2020.

Hochul said she wished she could have implemented the full scope of “Less Is More” immediately.

“I would like nothing more than to implement the law now. I legally cannot change the effective date,” she said. “But I also think that this sends a message to all others in the system that this is the law going forward.”

Benny Boscio, Jr., the president of the union representing city Corrections Department officers, welcomed Hochul’s “commitment to addressing the unprecedented crisis” at Rikers, but questioned how effective the new law will be and claimed it could result in more crime.

“Less criminals in our custody only means more crimes will be committed in our streets, creating more victims and that is an injustice,” Boscio said.

Hochul’s Rikers moves come amid mounting concern over safety on the island.

Overcrowding and staffing shortages in the city Corrections Department ranks has resulted in the deaths of 10 Rikers inmates this year alone.

Meantime, living conditions have worsened to the degree that state legislators who toured the jail this week said they witnessed “a humanitarian crisis” in the making, with garbage, fecal matter, rotting food, urine and dead cockroaches lining the hallways of the jail. The lawmakers said some inmates they spoke to had been kept locked up for more than a week without access to food, bathrooms or medication.

“How does this hell on earth exist today?” said Hochul, who was joined for the bill signing by state legislative leaders, prison reform advocates and the district attorneys of Brooklyn, Queens, the Bronx and Manhattan.

“This questions who we are as people that we can allow a situation that we’ve seen in Rikers exist in a prosperous, mighty city like New York. The fact that this exists is an indictment on everyone, and I’m going to do what I can.”

Mayor de Blasio — who did not attend the signing ceremony — praised Hochul’s actions, saying in his weekly appearance on WNYC that they are “going to make a huge difference.”

But the mayor also demanded more help from the state, contending that its court system must get up and running at full capacity so that the city doesn’t have to keep sending people to Rikers while they await trials.

“For now well over a year, I’ve been appealing to the state to restart the whole criminal justice system … They have not done that,” said de Blasio, who’s leaving office at the end of this year and has made it known he’s mulling a run for Hochul’s job in 2022.

Earlier this week, de Blasio unveiled a five-pronged plan for improving Rikers safety after facing criticism for months about a lack of action.

It also penalizes Corrections Department officers who take off work without good reason amid revelations that nearly 32% of them aren’t reporting for duty because they’re out sick, AWOL or on medically modified assignments.

In his radio appearance Friday, de Blasio took aim at Boscio’s union, saying that it has “not been a productive player” in ensuring adequate staffing level at Rikers.

Boscio did not take kindly to the mayor’s comment.

“He created this crisis by not hiring a single new correction officer for nearly three years all while the inmate population rose 57% last year alone,” the union boss said. “The whole world is now witnessing the severe consequences of his negligence. If he wants to understand why our officers are out, he should come visit Rikers and speak with them, which he hasn’t done in over four years. He is a coward.”

De Blasio’s plan has also been panned by prison reform advocates, who say he should stop focusing on enforcement and instead use the so-called 6A program to release inmates charged with non-violent offenses in order to address overcrowding.

Hochul declined to offer any pointers when asked what de Blasio should do to address the Rikers crisis, saying she’s “not going to ever stand here and point fingers.”

The Daily News political team supplies the essential news and analysis on the critical 2021 elections in New York City that will define the city’s future after coronavirus. Sent to your inbox every Monday, Wednesday and Friday.

But, she added, “he understands that this is his responsibility.”

Rikers’ safety is expected to remain a pressing topic well after de Blasio leaves office and could become a difficult issue for Eric Adams, who’s likely to become the city’s next mayor.

Both Adams and de Blasio want to shut down Rikers for good and build several new jails across the five boroughs to house inmates.

But it remains unclear how soon such a plan could be implemented and how it would be funded.

Long-term solutions aside, supporters of “Less Is More” hailed Hochul’s signing of the bill as a critical step in the right direction.

“This is happening now because of the conditions on Rikers and what the legislators saw,” said Donna Hylton, an ex-convict and prison reform advocate who lobbied for the bill’s passage. “This needs to be a clarion call for everyone. It has to be about our basic humanity and how we treat each other.”