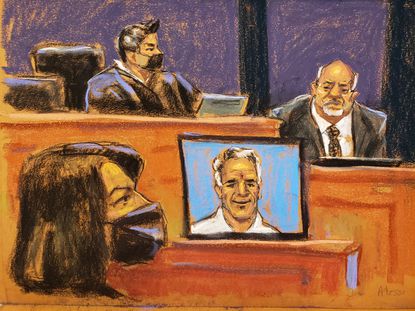 Juan Alessi, Epstein’s Palm Beach, Fla. house manager from 1990 to 2002, said Maxwell made him hand wash the sex toys on at least four occasions — after he’d first wiped down Epstein’s massage table and brought the sex offender’s soiled towels to the laundry room.

On Tuesday, the jury heard from a woman who said Epstein and Maxwell started sexually abusing her when she was 14. The witness who testified under the pseudonym Jane noted that the abuse often involved sex toys and “really painful” massage devices.

It wasn’t unusual to see sex toys lying around Epstein’s lair, nor was it odd to come across photos of topless women taken by Maxwell, Alessi testified.

After detailing Maxwell and Epstein’s sordid setup, Alessi testified he recalled picking up Jane from school.

When Alessi’s wife got a job helping him maintain the Palm Beach property to Maxwell and Epstein’s high standards, they sometimes had her pick up Jane and other girls, too, he said.

The girls always had to sit in the back.

“It was a rule of Ms. Maxwell,” Alessi said.

Alessi recalled finding other devices while cleaning Epstein’s massage room in the late 1990s, including vibrating back and neck massagers. Maxwell kept the room stocked with “exotic oils” from around the world, he testified.

Scores of women have alleged the dead multimillionaire sexually abused them as minors during massage sessions that escalated into extreme sexual abuse. Maxwell is accused of grooming the victims for Epstein’s sick routines and at times joining the abuse.

Alessi said that when girls and women arrived at Epstein’s Palm Beach mansion, the first stop was always at “Maxwell’s desk.”

The housekeeper testified that Epstein’s obsession with massages increased threefold during the years he worked for him. He was getting massages morning, noon, and late into the night.

“In the beginning, he received around one” per day, Alessi testified. “At the end of my stay, he received up to three massages a day.”

Alessi said his relationship with Epstein was cordial until Maxwell’s arrival in 1991.

Maxwell demanded an impossible work schedule, imposed draconian rules on hardworking house staff, and called Alessi the wrong name for a decade — addressing him as John, he testified.

“From the day she came to the house, she right away took over and she mentioned to me she was going to be the lady of the house,” he testified. “There was a time when she (said), ‘Jeffrey doesn’t like to be looked at in his eyes. You should never look at his eyes — just look at another part of the room and answer him.’”

Alessi told jurors he got the gig working for Epstein through another job: working at the home of Les Wexner’s mother. Epstein managed Wexner’s billions. The Victoria’s Secret founder sold Epstein his Upper East Side mansion.

The witness said he worked grueling hours for the couple, clocking up to 14 hours per shift.

The Palm Beach staff was expected to change the sheets in all six bedrooms, do the shopping and fill Epstein’s cars with cash by the time he came home for the weekend.

“Take care of the cars, make sure they’re clean and have $100 bills in the car,” he said. “The cars, they had to be immaculate.”

Alessi said that when he stopped working for Epstein and Maxwell, they made him sign a separation agreement to ensure his silence.

“I was required not to talk to anybody about his life or Ms. Maxwell,” he said, as Maxwell stared intently at him in the courtroom.

The testimony came on the fourth day of evidence at Maxwell’s trial. She’s accused of grooming minors for sex with Epstein for at least a decade and lying about the conduct under oath.

Maxwell, 59, has pleaded not guilty and argues the government has unfairly substituted her for Epstein after he killed himself in August 2019, embarrassing the Justice Department.