Congress approves funding to prevent the U.S. government from shutting down on Friday night 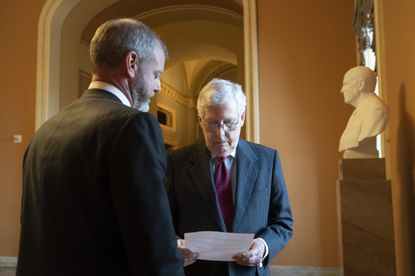 The House and the Senate passed a stopgap spending bill late Thursday evening and averted a short-term shutdown scheduled for just after midnight on Friday. The funding will allow the federal government to remain open through Feb. 18 after leaders defused a partisan standoff over federal vaccine mandates. The measure now goes to President Joe Biden to be signed into law.

Earlier in the day, congressional leaders announced they had finally reached an agreement to keep the government running for 11 more weeks, generally at current spending levels, while adding $7 billion to aid Afghanistan evacuees.

“I am glad that in the end, cooler heads prevailed. The government will stay open and I thank the members of this chamber for walking us back from the brink of an avoidable, needless and costly shutdown,” said Senate Majority Leader Chuck Schumer, D-N.Y.

The Senate approved the measure by a vote of 69-28.

The Democratic-led House passed the measure by a 221-212 vote. The Republican leadership urged members to vote no; the lone GOP vote for the bill came from Illinois Rep. Adam Kinzinger.

Rep. Rosa DeLauro, chairwoman of the House Appropriations Committee, had pushed for a shorter duration, but Republicans said more time was needed to settle differences on a spending package covering the entire budget year through September.

“While I wish it were earlier, this agreement allows the appropriations process to move forward toward a final funding agreement which addresses the needs of the American people,” DeLauro (D-Conn.) said in a statement.

Prior to the vote, President Biden said he has spoken with Senate leaders and he played down fears of a shutdown.

“There is a plan in place unless somebody decides to be totally erratic, and I don’t think that will happen,” Biden said.

For some Republicans, the court cases and lawmakers’ fears about a potentially disruptive shutdown were factors against engaging in a high-stakes shutdown.

“One of the things I’m a little concerned about is: Why would we make ourselves the object of public attention by creating the specter of a government shutdown?” said Texas Sen. John Cornyn, a GOP leader.

It was just the latest instance of the brinkmanship around government funding that has triggered several costly shutdowns and partial closures over the past two decades. The longest shutdown in history happened under President Donald Trump — 35 days stretching into January 2019, when Democrats refused to approve money for his U.S-Mexico border wall. Both parties agree the stoppages are irresponsible, yet few deadlines pass without a late scramble to avoid them.