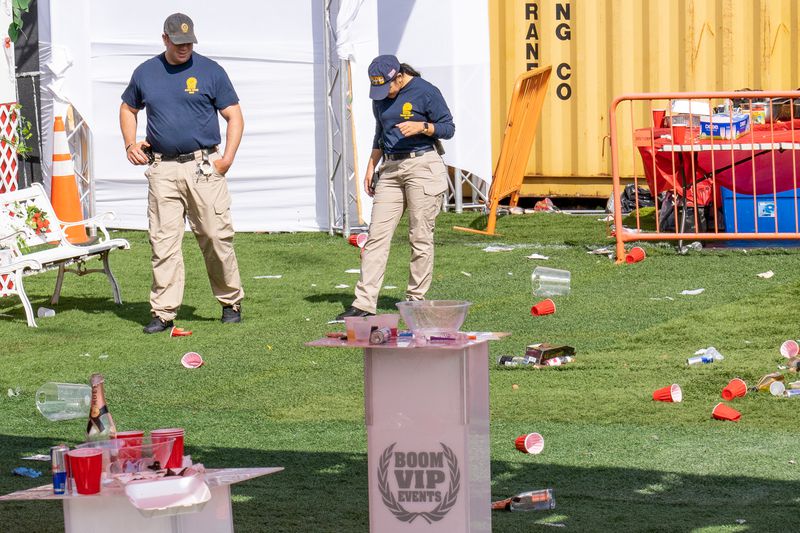 Police were drawn to Brooklyn Garden Event Space on Wortman Ave. and Sheffield Ave. in East New York about 12:30 a.m. by an alert from ShotSpotter, the NYPD’s high-tech citywide system of speakers that detect gunfire, sources said. Neighbors also called 911.

Cops found three men shot sitting inside a parked Infiniti sedan a block away on Wortman Ave. and Georgia Ave.

“I heard the shots at the party,” said a security guard who works near the event hall. “I saw people running… It’s a party, anything can happen. I wasn’t surprised.”

One of the men inside the Infiniti, age 36, was shot once in the head and died at Brookdale University Hospital. A second man, also 36, was shot in the face, chest, and arm and died Kings County Hospital, cops said.

A 51-year-old man was taken to Brookdale Hospital in critical condition for bullets in his forearm, upper back, and chest.

About seven minutes after the men were gunned down inside the car, a 32-year-old man was shot in the neck and chest inside the event space, police said. Medics rushed him to Brookdale University Hospital, where he is in critical condition.

A fifth victim checked himself into Montefiore Hospital in New Rochelle, where he is in stable condition. Cops said the 37-year-old victim was also shot inside the event space.

The security guard saw the gunman hop into a black SUV before zipping off.

“I heard two shots in the party and then the shooter jumped into a black SUV,” he said.

Locals said the event space has held parties almost every Saturday night during the summer, usually packing 300 to 400 revelers.

The manager for the event space did not return calls from reporters.

About an hour earlier and just a half-mile away a gunman killed a 25-year-old man and wounded a 19-year-old girl, police said. Cops have not linked that shooting to the mayhem on Wortman Ave.

10 people have been murdered in the 75th Precinct that covers East New York this year through Aug. 1, a 52% drop from the 21 homicide victims by the same point last year.

Shootings are also down in the precinct, with 45 people shot so far this year compared to 70 victims by the same time year; a 36% decrease.

Homicides are down 2.4% citywide with 245 people killed so far in this year compared to 251 victims during the same same time frame last year.