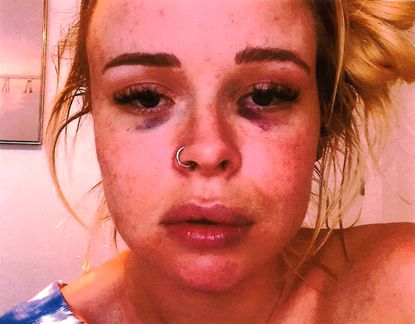 The woman who says Dodgers pitcher Trevor Bauer punched and choked her during sex consented Thursday to the public release of an “unredacted” photo showing her alleged injuries, her lawyer said.

The photo shows the woman with what appear to be two black eyes.

“Look at this picture. No one — absolutely no one — can consent to this, logically or legally,” the woman’s lawyer, Bryan Freedman, said in a statement.

Freedman said the woman and her family gave him permission to share the image publicly after Bauer’s legal team filed a motion Tuesday asking a judge to bar testimony from a proposed expert on domestic violence at an upcoming court hearing to determine whether a temporary domestic violence restraining order in the case should be extended.

Bauer’s filing said the woman willingly agreed to engage in rough sex and even texted a cousin hours after a May 16 meeting with Bauer and explicitly stated her black eyes were the result of a “consensual” encounter.

“As long as it was consensual I don’t have to kill him,” the cousin texted, according to Bauer’s filing.

“It was consensual but like didn’t expect two black eyes?? Like he def took it too far don’t you think lol,” the woman’s reply text said, according to the filing.

“Trevor Bauer’s team continues to try to abuse an assault victim. They need to stop. Now,” Freedman countered in his statement.

The next court hearing in the case, set for Aug. 16, is expected to last four days and include a turn on the witness stand for Bauer.

In her original petition for the restraining order filed June 29, the woman, who is not being named because she’s an alleged victim of domestic violence and not a public person, said she had her first sexual encounter with Bauer on April 22 after she tagged him in an Instagram story and they started talking online.

She said it quickly became apparent “he preferred being aggressive” and that she told him “it was okay to be a little rough.”

But she said that without permission, he wrapped her long hair around her neck and choked her until she lost consciousness.

The woman said she returned to Bauer’s Los Angeles County home on May 15 and agreed “on a safe word” for another sexual encounter.

The woman claimed Bauer choked her with her hair again, and as she was “trying to regain full consciousness,” he allegedly “began punching (her) face.”

“I remember this vividly as it was extremely startling and painful,” she said. “I was absolutely frozen and terrified.”

Bauer, 30, denies doing anything non-consensual during his interactions with the woman.

His lawyers have argued he has not tried to contact her , making a continuation of the restraining order unnecessary.

Bauer is in his first year with the Dodgers after signing a three-year, $102 million contract.

After the sexual assault allegations were reported, Major League Baseball placed him on the administrative list. He hasn’t pitched since June 28.

The woman, who reported her claims to Pasadena Police, says she intends to cooperate with any “criminal proceedings.” No charges have been filed in the case.

“As the shock has worn off, I recognize the seriousness of the sexual assault I endured,” she said in a June statement to the court. “I do not want Trevor to put anyone else through what I suffered.”