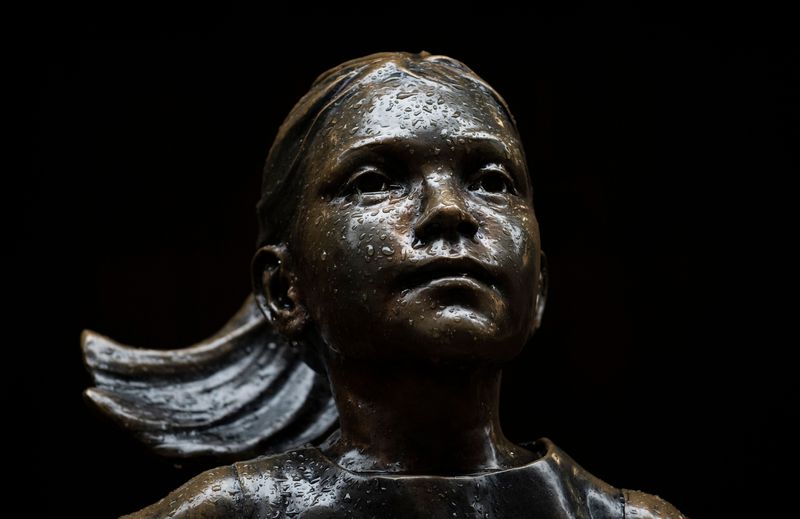 Fearless Girl’s backers seem a little scared of COVID’s effect on business in the Big Apple.

State Street Global Advisors — the financial mega-firm that set up the symbol of women’s empowerment in the heart of the Financial District — is reportedly closing its two New York City offices.

The Boston-headquartered company recently told about 500 employees they won’t be going back to Midtown offices that have been mostly shut since the start of the pandemic, according to the Wall Street Journal.

State Street reportedly plans to lease its offices, located near the Rockefeller Center, to other companies.

It made headlines in 2017 for installing a four-foot-tall bronze stall of a girl in a defiant pose just steps away from the Wall Street Bull. The work was later moved to Broad St., across from the New York Stock Exchange.

In spite of its stated purpose of celebrating “the power of women in leadership,” the statue garnered plenty of criticism.

“If the world has learned just one thing in the past 24 years — or at least during the last presidential election — it should be the difference between confronting an adorably defiant chin-up little girl and standing toe-to-toe with a grown woman who demands and deserves to be recognized as an equal,” Ginger Adams Otis wrote in the Daily News.

State Street did not immediately answer a request for comment on the statue. It will remain in place, according to the Journal.

The company is getting out of Dodge as swathes of Midtown offices remain empty, and as surging COVID numbers cast doubt on city officials’ expectations of a glorious return to normal working conditions.

“We have taken a diligent look at our real-estate footprint in NYC,” company spokesman Edward Patterson told the Journal, adding that the firm is “ensuring that our realty needs are in line with where our employees will be working.”