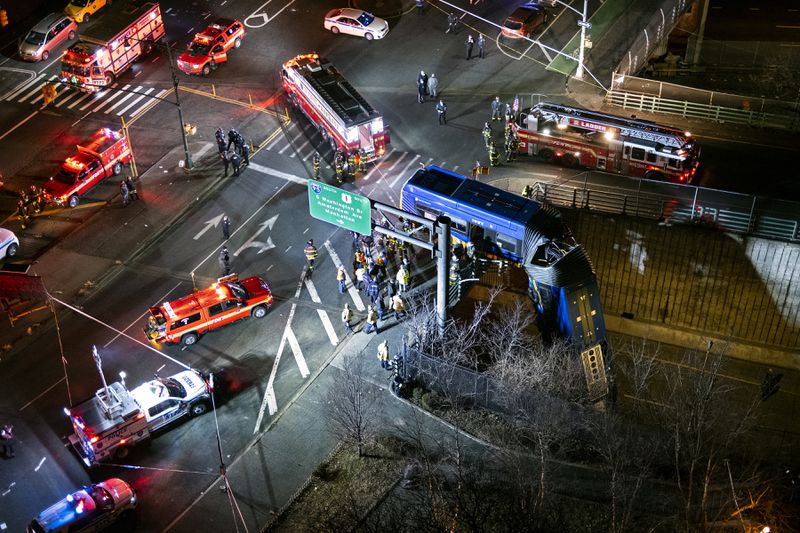 The tandem MTA bus that veered off an overpass onto the Cross Bronx Expressway was finally removed from its precarious perch early Friday after spending hours overnight dangling over the road.

FDNY officials said it fell about 50 feet before hitting the ground, its descent slowed by an articulated connection to the rear section.

The bus was traveling down University Ave. just east of the Major Deegan Expressway in Highbridge around 11:10 p.m. Thursday when the front half of the bus veered to the edge of the overpass, busted through a metal gate and fell over the side.

Shocking photos and video on social media show the bus teetering over the overpass onto the Cross Bronx Expressway.

First responders had to juggle two emergency situations: the one on the overpass and the one on the highway, said FDNY Acting Battalion Chief Steven Moore.

“While responding to this incident, I began discussing the information we were receiving, picturing a bus hanging off the edge,” Moore wrote on Instagram. “#Rescue 3 began securing the bus up-top while #Engine 43 made their way around to begin treatment of the civilian patients.”

“The bus fell approximately 50 feet onto the access road. The patients suffered injuries consistent with a fall from such a great height,” Hopper said.

The bus driver suffered an injury to his jaw during the crash, officials said. The seven passengers injured in the crash complained of pain and bruising.

All of the patients were taken to Lincoln Hospital and St. Barnabas Hospital, officials said.

The MTA was still trying to determine Friday what sparked the crash.

“We are conducting a full investigation and will implement lessons learned in order to prevent it from happening again,” MTA Chief Safety and Security Officer Patrick Warren said in a statement. “We are certain this was a terrifying incident for those customers on the bus. Our hearts go out to them with hope that they can recover quickly.”