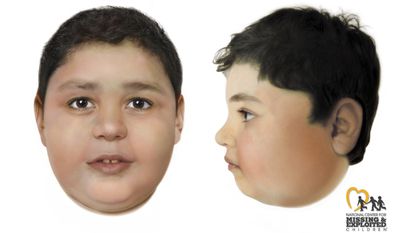 The FBI is offering a $10,000 reward for information on the real identity of John “Little Zion” Doe, a boy whose body was discovered tucked among some brush just off a hiking trail near Las Vegas.

A group of hikers walking along a Mountain Springs trailhead, located just off State Route 160, discovered the remains hidden behind a bush on the morning of May 28. Authorities have not released his cause of death but have said they are investigating the case as a homicide.

Investigators suspect the body was left there at some point the night before, while it was dark out.

The Las Vegas Metropolitan Police Department and the National Center for Missing and Exploited Children on Thursday also released new, computer-generated images of the John “Little Zion” Doe, nicknamed for the trail by which he was found. He is described as 4-foot 11-inches tall and 123 pounds.

In the week since the tragic discovery, investigators have sifted through hundreds of tips from states including California, Arizona, Utah, Texas, Nebraska and Iowa, homicide Lt. Ray Spencer told the Reno Gazette Journal. So far they’ve uncovered little to help them identify the boy, prompting authorities to call on members of the community to come forward with information.

Due to the location where the body was found, police believe the boy may have lived in Las Vegas, Pahrump, Baker or other nearby cities. Police have asked teachers in those areas in particular to pay close attention to the new images.

“This child has the right to be referred to by his given name. He’s someone’s son, someone’s grandson and he deserves law enforcement’s commitment to solving this case,” FBI supervisory special agent Jeremy Schwartz said during a press conference Thursday. “We are counting on the public to help us with his identification.”

Anyone with information concerning the case is urged to contact the Las Vegas Metropolitan Police Department’s homicide unit at 702-828-3521 or the FBI’s toll-free tip line at 1-800-225-5324.

“Any tip, regardless of how small, we are following up on in an effort to identify who he is,” Spencer said.